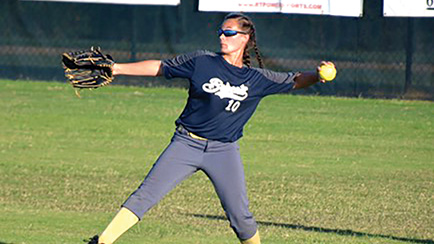 Photos by Stacy Leake/Above: Peyton Barron of the Bogue Chitto Lady Bobcats throws the ball in from the field in Tuesday night’s game against the West Lincoln Lady Bears. Below: Lyndsey Cooper takes a practice swing as she waits on deck for her turn at bat against the Lady Bears.

It only took 14 hits from the Bogue Chitto Lady Bobcats to bring in a 9-1 win over the West Lincoln Lady Bears Tuesday night in seven innings.

The Bobcats’ Lyndsey Cooper and Alece Nettles each connected to get safely on first for a single. Four players doubled up on singles in the game — Stevie Montgomery, Baileigh Jackson, Reagan Kirkland and Lineka Newsom.

“We hit decent,” said coach Scott Leggett. “You know, 14 hits is pretty decent. But at this point in the season, we do need to be hitting the ball a little better.”

Montgomery led Bogue Chitto in RBIs with three for the night. Kirkland got two RBIs and Newsom had one.

Defensively, the Lady Bobcats played as a powerhouse, keeping hits to a minimum and the bags well-guarded.

“We did a good job defensively,” said Leggett. “The whole defense played well. Other than that, it was just an OK game, honestly.”

Bogue Chitto dominated the game all the way through, scoring twice in each of the first two innings, then once in the fourth and three times in the top of the sixth before West Lincoln claimed their only trip across home plate. The Lady Bobcats put the final nail in the coffin in the top of the seventh inning to take the game 9-1 on 14 hits and two errors. West Lincoln had six hits and seven errors over the course of the game.

Bogue Chitto faces Sebastopol in playoffs Saturday in what could be a triple-header if one team does not take both of the first two games. Games start at Bogue Chitto at 2 p.m.

Brookhaven Academy Coach Flowers: ‘It’s a great day to be a Lady Cougar’

For the first time in Brookhaven Academy fast-pitch history, the Lady Cougars advanced past the second round of the South... read more