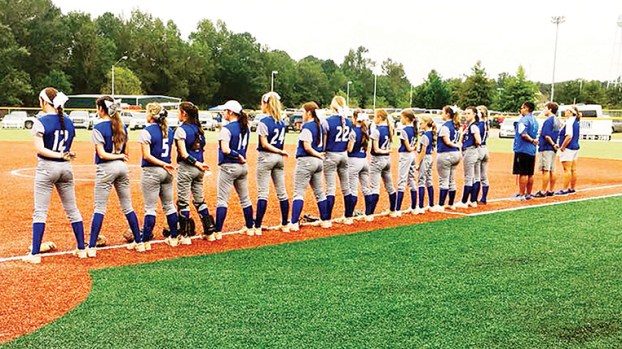 Photo submitted/The Lady Cougars stand for the national anthem prior to a game in the state tournament Monday.

Brookhaven Academy Coach Flowers: ‘It’s a great day to be a Lady Cougar’

For the first time in Brookhaven Academy fast-pitch history, the Lady Cougars advanced past the second round of the South State tournament. BA’s last appearance in the tournament was in 2014.

Placing as the 2017 South State runner up was a huge step for the softball program. Then winning the first two games in the state championship tournament aligned the Lady Cougars with the most experienced schools in AA, losing to defending champion Tri County Academy and the perennial contender Marshall Academy.

“This was Marshall’s fourth year to play in the consolation round of the state tournament, and it proved to be a charm as they held on to beat us 2-1 in eight innings, to place BA third,” said coach Becky Flowers. “So, for our initial appearance in the championship round, to place third is amazing.”

Flowers said when the playoff contention began in the first game of the South State tournament, her team made the plan to play one inning at a time. She said that approach is what kept them in the fight for seven games to finish as runner-up, and four games in the state tournament.

“I could not be more proud to coach these amazing young ladies,” said Flowers. Seniors Kailyn Jordan, Cameron Watson and Madison Thompson provided leadership that catapulted the team into the playoffs, Flowers said.

“With our pitchers and catcher being young — Madi Smith, Emily Claire Felder, Abeni Fuller — and out outfielders Makayla Martin and Madison Moak all being in eighth or ninth grade, our future is immeasurable and we should be contenders for many years,” said Flowers.

Flowers said that although it would be an impossible task to replace her departing seniors, the returning upper classmen of junior Jana Case and sophomore Julie Anna Bartram should prove to be excellent leaders next year. As strong utility players both offensively and defensively, Case and Bartram are expected to do very well.

“It’s a great day to be a Lady Cougar,” said Flowers.

Brookhaven’s bats were hot early in a 19-9 win over West Lincoln Monday. The Lady Panthers scored on a homerun... read more