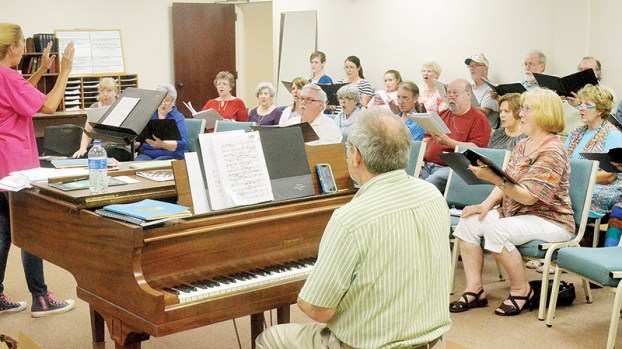 Photo by Matt Rushing/Steve Russell provided piano accompaniment Tuesday during the Lincoln County Choral Society’s rehearsal for one of its upcoming shows.

Lincoln County Choral Society gets tuned up for Carnegie Hall

The Lincoln County Choral Society is heading to New York City to perform at one of the world’s most prestigious concert halls.

In February, the choral society will join Mississippi School of the Arts students for a joint performance in midtown Manhattan at Carnegie Hall.

“It’s going to be a great time and the opportunity to be able to perform in Carnegie Hall will be amazing,” said Cindy Hunter, co-director of the choral society.

The choir plans to catch a Broadway show while they are in New York.

Jens Oliva, previously the choir director at First United Methodist Church Brookhaven, founded the choral society three years ago. She’s since moved to Florida and Pat Rice and Hunter have taken the reins as co-directors of the group. Rice is the director of vocal music at MSA.

The group practices every Tuesday from 6 to 8 p.m. at FUMC on Cherokee Street. Membership is always open.

“Anyone is welcome to come join the group. We’ve got several high school students and people over the age of 60 here, so it gives us a good diversity in forming our group,” said Hunter.

Hunter said the best time to join the choir is during one of the Tuesday night practices.

“This is a group of people that do this strictly for the love of singing,” she said. “Since so many churches have gone to a non-traditional style of singing, this provides a place for people to come and have a more classical approach.”

In the spring, the choir will perform “Mozart’s Requiem” in Brookhaven. Dates of that performance have yet to be determined.