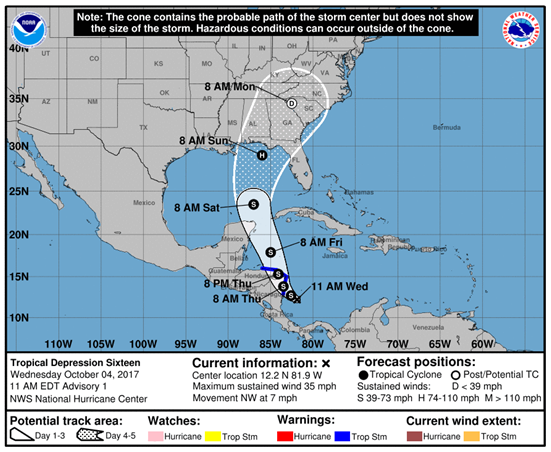 Tropical storm or hurricane could hit Gulf Coast by Sunday

(AP) A tropical depression has formed off the Atlantic coast of Central America and the National Hurricane Center said it was likely to bring heavy rains to that region before a possible eventual hurricane-force strike on the United States over the weekend. The long-term forecast showed the storm reaching the U.S. Gulf coast by Sunday.

It had maximum sustained winds of 35 mph and was located about 45 miles west-southwest of San Andres Island. It was moving toward the northwest at 7 mph. A tropical storm warning was in effect for parts of the Nicaraguan and Honduran coasts.

The center said 15 to 20 inches of rain were expected across parts of Nicaragua, with strong and possibly dangerous rains also likely in Honduras, Costa Rica and Panama. The storm was projected to cross into the northwestern Caribbean Sea on Friday.

Natchez man dies after being shot in his vehicle

NATCHEZ (AP) — A man has died after being shot several times while inside of his vehicle. The Natchez Democrat... read more