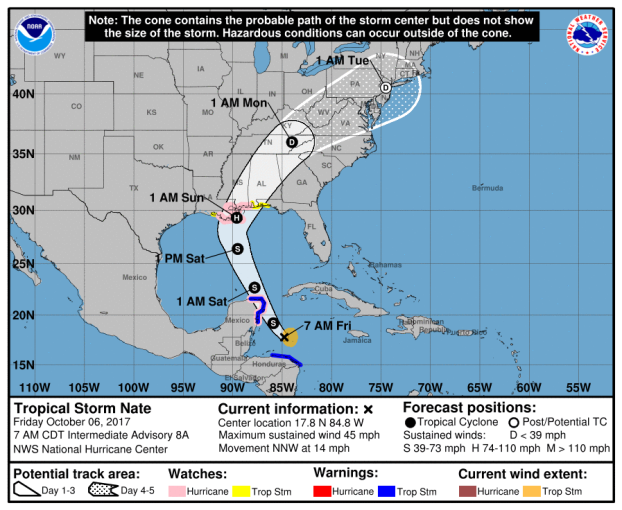 Lincoln County officials are keeping their eye on Tropical Storm Nate as the storm is expected to make landfall this weekend on the Mississippi Gulf Coast.

“I’m currently talking to MEMA (Mississippi Emergency Management Agency). We will keep the public informed on any decisions,” said Clifford Galey, director of emergency management for Lincoln County. “We’re going through the proper channels right now to get prepared.”

According to Anna Wolverton, a meteorologist with the National Weather Service in Jackson, Nate is forecasted to track north to northwest. It could make landfall on the Gulf Coast on Sunday.

“There’s still a bit of uncertainty in the forecast, so we encourage everyone to stay updated. We’re constantly sending out forecast updates for this storm,” said Wolverton.

The weather today looks good, with a high of 87 degrees and sunny skies.

“Depending on when and where the storm makes landfall, it could be windy and rainy this weekend in Brookhaven,” Wolverton said.

Mississippi Department of Transportation advises the public to pay close attention to weather and travel advisories issued by the National Hurricane Center.

In an emergency situation, MDOT will implement contraflow (lane reversal) for both I-59 and I-55 when requested by Louisiana and approved by the Gov. Phil Bryant.

The I-55 contraflow operations would begin in Louisiana, extend into Mississippi, and end just south of Brookhaven.

“Since the system will be moving over very warm waters, we could quickly have a powerful hurricane on our hands,” said AccuWeather hurricane expert Dan Kottlowski.

Some on the state’s Gulf Coast began sandbagging, while officials cancelled the Saturday portion of an outdoor music festival and tried to figure out what to do about a car show that’s one of the area’s most popular tourist events.

Biloxi firefighters were handing out a message from the city’s mayor urging more than 700 recreational vehicle campers along the beachfront highway and in nearby RV parks to consider leaving early. Most are visiting the weeklong “Cruisin’ the Coast” car show, which officials are considering curtailing.

“We don’t want any of our visitors to be in harm’s way,” said city spokesman Vincent Creel. City officials feared such vehicles could be especially vulnerable to high winds, he said.

More than 8,000 cruisers registered for the festival, a record in its 21 years.

Some casinos could decide to close on their own, but Gaming Commission Executive Director Allen Godfrey said regulators have not yet ordered closure.

Officials were also taking precautions against excessive rainfall. The U.S. Environmental Protection Agency announced it would discharge 40 million gallons of partially treated wastewater from a former fertilizer plant in Pascagoula. EPA took over wastewater treatment at the former Mississippi Phosphates plant earlier this year after money set aside during a bankruptcy proceeding to pay for wastewater treatment ran out. The EPA cited the possibility of high rainfall creating an uncontrolled spill. Previous spills of highly acidic water have damaged environmentally sensitive marshlands to east.

Smithson said people should not be complacent about the possibility of a relatively weak hurricane. He says most fatalities during hurricanes happen because of drowning, not because of wind speed. Hurricanes can also cause spinoff tornadoes and power outages.