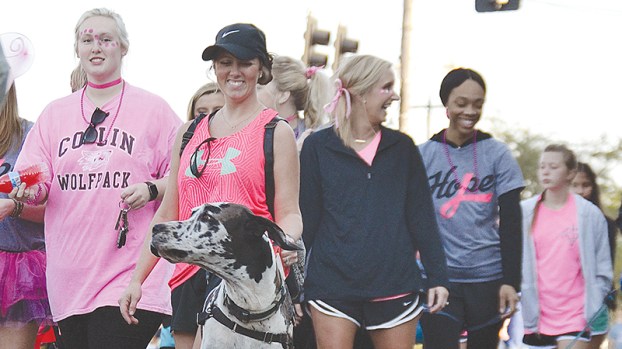 Photo by Donna Campbell/Teams and individuals take off at the beginning of the annual MsGirls4aCure Breast Cancer Awareness 5K during the Ole Brook Festival downtown last year. The race will again start the annual festival Saturday, with registration at 7 a.m. prior to the 8 a.m. start. This year, participants will encounter a foam machine along the route as well as a foam cannon.

Walking for a cure in Brookhaven is contagious

“It’s a group of local women, all breast cancer survivors, and if an individual from Brookhaven is diagnosed with breast cancer, they put together goodie bags for them and give them their numbers so they can call anytime just to talk,” she said.

Registration for the 5K starts at 7 a.m. at the main stage at Cherokee Street and Railroad Avenue. The race begins at 8 a.m.

T-shirts will be available for sale.

Participants will encounter two foam machines along the route. One set up near Brookhaven Elementary will rain foam on runners and walkers. Another is a foam cannon that will be placed in a strategic location along the route.

“It will shoot foam at them,” she said.

The walk is held each year during October, which is Breast Cancer Awareness Month. Cook was diagnosed in 2005.

“When you step off of the elevator on the oncology floor and see everyone, it’s a hard thing,” she said. “I remember my 10 year-old son asking me if I’m going to die, and I said, ‘I can’t lie to you son, I don’t know.’”

Cook’s best friend, Leigh Ann Martin, quickly came by her side to support her.

“It was very scary. Just watching your friend going through chemotherapy and seeing how it affects their day to day life, it was tough to watch,” Martin said. “She had four babies at home and family, but she was so strong during it all.”

Cook had 56 chemo treatments and six weeks of radiation therapy. She scheduled treatments before the weekend, knowing severely ill she’d become from the medicine doctors used to save her life. She lost her hair.

Shortly after her diagnosis, Martin suggested she and Cook organize MSGirls4ACURE

“One of the biggest things that I went through was losing my hair. As a woman, your hair is a big deal,” said Cook. “I would take a wig to work with me every day. After a while, I got used to it, but it’s probably one of the hardest parts of going through cancer treatment.”

Shortly after she was diagnosed, Martin came up with an idea to support her friend in a fun way.

She and Cook were the two founding members of MSGirls4ACure.

Since 2008, MSGirls4ACure has sponsored the 5k race during the Ole Brook Festival. When it started, they raised the money to support their participatin in the Susan G. Komen three-day, 60-mile walk. She’s participated in that race eight times.

Participation in the race has dropped over the years. Cook believes it’s because there are so many worthy causes raising money with 5K races in Brookhaven. Still, breast cancer awareness is a cause dear to their hearts so as long as they can run the race they’ll keep going.

“This cause means a lot to us,” she said. “As long as we have participation, we’ll keep doing it,” she said.

Visitors to the Ole Brook Festival Saturday could walk away with a bobcat, cougar, bear, panther or even a yellow... read more