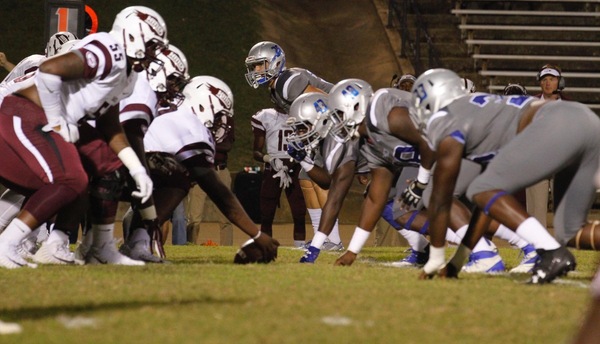 Wolves lose heartbreaker to No. 12 Hinds

The Copiah-Lincoln Community College Wolves fell to the No. 12 ranked Hinds Eagles Thursday night, 16-15, in a tough contest. Co-Lin had an opportunity late in the game, but penalties proved problematic. With the loss, Co-Lin moves to 3-3 on the year and 1-3 in the MACJC South Division. The Hinds Eagles improve to 5-0 and 4-0 in the South Division.

Co-Lin struck first as the Wolves capped off a drive with a Griffin Sublett 30-yard field goal to take a 3-0 lead with 4:30 left in the first quarter.

After back-and-forth action in the second quarter, Hinds punted away to Co-Lin’s DeMatre Collins. The freshman returned the punt 24-yards to the Eagle’s 37-yard line. Rico Owens took over and gained all 37-yards on four straight carries, including a 28-yard burst up the middle. Owens stretched the Wolves’ lead to 10-0 with a two-yard half back dive.

The Eagles answered quickly with the help of DeMarcus Frazier who returned the ensuing kickoff 43-yards to Co-Lin’s 46-yard line. Just four plays later the Eagles were on the board as Eric Clark connected with Stephen Guidry Jr. from 16 yards out. The touchdown pass and point after attempt cut Co-Lin’s lead to 10-7 with just 4:53 remaining in the half.

Late in the second quarter, Hinds strung together another drive after the Eagles recovered a Co-Lin fumble at their own 46-yard line. The Wolves held Hinds out of the end zone, but Spencer Cole booted a 22-yard field goal with just 29 seconds remaining in the half.

As the teams headed into the locker room the game was tied at 10-all.

In the third, the Eagles were backed up to their own end zone after a Sublett punt landed at the Eagle’s six-yard line. Hind’s Tyler Morton was called for intentional grounding has the Co-Lin defensive line broke through and forced Morton to throw the ball away. The freshman’s feet were in the Eagle’s end zone at the time of the throw, which caused a safety. The rare play resulted in the Wolves taking a 12-10 lead with 4:28 to play in the third quarter.

The Wolves added to that lead in the fourth after Sublett drilled a 43-yard field goal with 6:59 remaining in the game. The kick sealed an eight-minute Co-Lin drive that seemed to give the Wolves energy late in the game, and a 15-10 lead.

Unfortunately the Eagles took the momentum right back, as DeMicheal Harris returned the ensuing kickoff 89 yards for a Hind’s touchdown. The Eagles attempted a two-point conversion in an effort to stretch the lead to three, but the Wolves’ defense held strong. With 6:45 remaining in the game the Eagles led 16-15.

The Wolves began marching down the field after the ensuing kickoff. With 4:21 remaining, Co-Lin’s drive looked to stall at the Hinds’ 44-yard line, as it was fourth and one. A false start backed the Wolves up to near midfield and stretched the play to fourth and six. Woody Barrett escaped the pocket on the fourth down play and broke free for a 29-yard gain. The Wolves had a fresh set of downs at the Eagle’s 20-yard line, but two short rushes and a penalty pushed Co-Lin back to Hinds’ 30-yard line. After a Barrett scramble, Co-Lin was back to the 21-yard line, but the Wolves were left with fourth and 11 with just over two minutes remaining. The Co-Lin coaching staff called on Sublett for a 38-yard attempt, but the kick was wide right and the Eagles took over possession. Hinds ran the clock out and solidified the 16-15 win.

Overall, the Wolves finished the night with 372 offensive yards while only giving up 171. The Wolves had 11 penalties for 118 yards.

Barrett finished the night 10-for-18 in the air for 96 yards. The freshman from Orlando, Fla. also added 84 yards on the ground with 14 carries.

Owens led the Co-Lin rushing attack, as the freshman posted 119 yards on 21 carries with one score.

Defensively, Sh’Mar Kilby-Lane led the Wolves. The Florida State transfer had five tackles, one tackle for loss, and one pass break up. Lomoni Jones had four tackles, while Swayze Bozeman, Paul Wilson Jr., Barry Howard, Jakaiszer Glass, and Tyler Glass all had three each. Wilson also added an interception.

The Wolves are back in action next Thursday, October 12 at 7:00 p.m. as the Holmes Bulldogs travel to Wesson to take on Co-Lin in Stone Stadium. The game can be streamed live at colinathletics.com or fans can listen at WMJU 104.3 FM. Follow @colinathletics on Twitter for updates.

The Bogue Chitto Lady Bobcats and the Brookhaven Lady Panthers met head-to-head just one week ago in a match-up that... read more