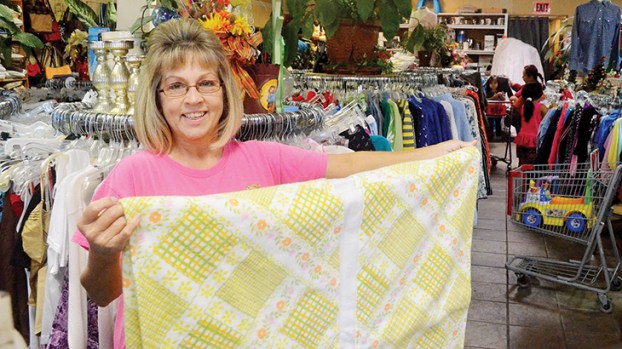 Photo by Matt Rushing/Patricia Howe, manager of the St. Andrew’s Thrift Store on East Monticello Street is collecting donations of blankets, pet food and hay bales that can be given to elderly residents who express a need for items for their pets.

St. Andrew’s Thrift Store in Brookhaven asks for help reaching out to elderly

An area thrift store is asking for donations to help out elderly Lincoln County residents and their pets.

“I’m a sucker for animals. There are many elderly people that have pets and in some cases they can’t afford to take care of them,” Howe said.

Howe said pets can be a good companion for older adults, but they may not be in a position to be able to care for their furry friends as well as they should.

“It’s sad to see because if it wasn’t for me, my Dad wouldn’t be able to take care of his dog and he loves that dog so much,” she said.

Howe said that the winter months can be much harder on animals than people, and that she has seen a lot of people who have had to get rid of their pets because they couldn’t afford to adequately provide for them.

“I know so many people that will just feed the dogs their food at the table, because they don’t have dog food,” Howe said.

That’s why Howe is hoping that others may be able to step up and help out.

”We’re asking for old blankets, dog food, and hay for a dog that stays outside in the winter,” she said. “Anything to help them get through the colder months.”

So far, she said they haven’t received many donations, but she hopes things will start to pick up soon.

You can drop off any donations at the thrift store located on East Monticello Street on Monday through Friday from 9 a.m. to 5 p.m., or on Saturdays from 9 a.m. to 2 p.m.

“This is heartbreaking, because I don’t want to see any human or animal mistreated,” said Howe. “This is specifically aimed at helping animals, but if you want to donate a blanket specifically for the elderly, we’d be more than happy to take any donations.”

Items donated specifically for this cause won’t be sold at the thrift store. Instead, Howe will match donations with those who need them.

A Brookhaven business owner is taking a stand to protest the protests. Randy Eckman, who owns the Fox’s Pizza Den... read more