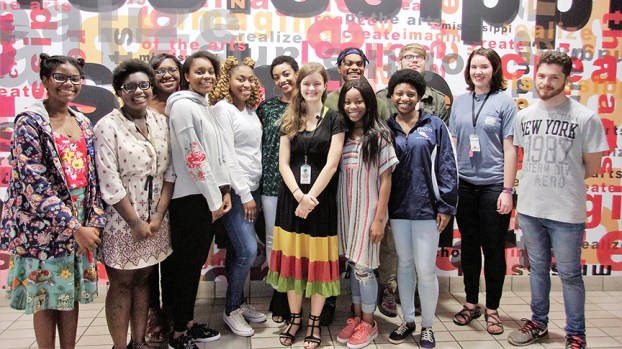 Mississippi School of the Arts students kept busy over the summer

This summer, The Mississippi School of the Arts’ class of 2018 was busy traveling, perfecting their skills, and volunteering across the globe in places like New York City and Peru as well as here at home in Mississippi. Theater student Jared Smith received an invitation to the Acting Intensive and Law Program with the National Student Leadership Conference at Yale University where he spent three weeks. Visual Artist Jacob Graves attended the Pre-College Art Lab at Kansas City Art Institute for three weeks, while Caroline Moran participated in the Rising Star Program at Savannah College of Art and Design.

Dancer Davon Blackwell was invited into the Pre-Professional Apprentice Program with the Nashville Ballet, the largest professional dance company in Tennessee and was invited to be a member of the Company. Fellow dancers Devonna Curtis and Kenya Moore auditioned and were accepted into the Alvin Ailey Summer Intensive in New York City where they perfected their technique in the heart of the city’s theatre district, while Junyla Silmon attended the Bates Dance Festival in Lewiston, Maine. Media Arts student Clinton Hart was sound manager for Running Wild Films this summer, and assisted on commercials and with their new film, Her Calling.

Our writers were busy as well: Selah Norwood attended the Tougaloo College Slam and won six awards, while Jadaccia Brown attended the Ole Miss Leadership Summit, where rising seniors receive instruction on leadership development, as well as the McMullan’s Writer’s Workshop at Millsaps with classmates Abigail Jordan, Christopher Aaron and Amory Campbell, who was published in Write For Mississippi. Fellow-literary student Shelly Castilaw traveled to New York to receive her Award from the National Scholastic Writing Awards.

Some students chose to spend their last summer before senior year in the service of others: Hailey Randolph worked as a counselor at two special needs camps this summer, while Ciera Presley traveled to Peru to serve in the Peace Corps.

MSA is an 11th and 12th grade visual and performing arts residential, public high school located in Brookhaven.  Students not only meet and exceed the traditional state high school curriculum, they receive special instruction in visual arts, vocal music, dance, literary arts, media arts and theatre. Students interested in MSA apply by Feb. 1 of their sophomore year. The school holds the third highest ACT average in the state and the graduating class of 2017, 55 Seniors, received over $10.2 million dollars in college scholarship offers.

For additional information about MSA, call 601-823-1300 or visit msabrookhaven.org

Randy and Cheryl Freeman announce the engagement and approaching marriage of their daughter Jaime Walker of McComb to Garrett May... read more