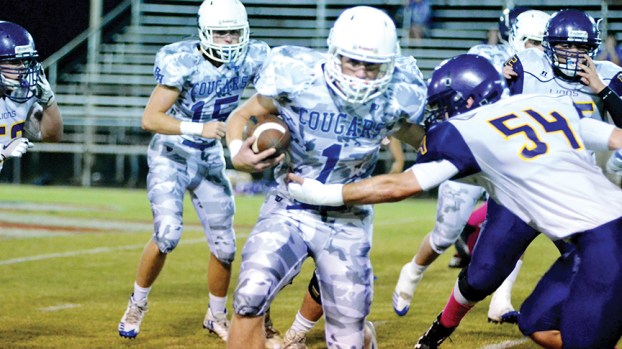 Photo by Matt Rushing/Brookhaven Academy senior running back Logan Murray (1) tries to push through a tackle in Friday’s game against Union Christian.

BA jumped out to a 35-0 lead on Armed Forces Appreciation Night going into halftime on three rushing touchdowns from two seniors: Tanner Waldrop and Logan Murray, and one from freshman Luke Johnston.

Josh Warren, of Union Academy, returned a kickoff 88 yards for a touchdown to end the first half. The Lions also added a touchdown as the clock expired.

A running-clock second half flew by and the Cougars improved to 7-2, with a final score of 35-12.

The Cougars have a big home game next week against Amite School Center. If they win, they will make the playoffs for the first time since 2012.

The Bogue Chitto Bobcats scored first and jumped ahead of the Amite County Trojans Friday night, but couldn’t hold onto... read more