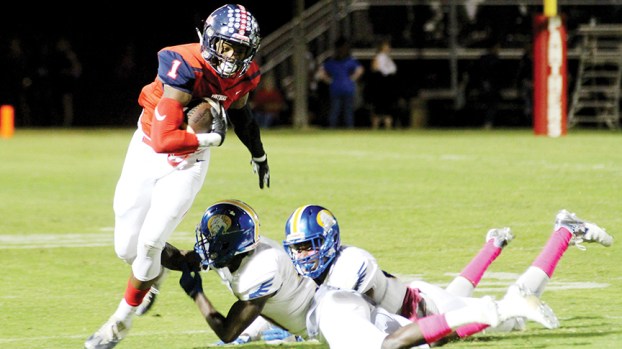 “Hold everything Panther fans, there’s a flag on the field,” said Brookhaven High public-address announcer Stan Patrick Friday night at King Field. Patrick would end up using his catchphrase over and over and over, but in the end, it went down as a region win for Panthers (7-1,4-0) as they handled the visiting Natchez Bulldogs 42-33.

With a packed homecoming crowd and an opponent in Natchez (4-4,1-3) that sits well back in the region standings, many Brookhaven fans might have expected the Panthers to cruise to any easy win. The Bulldogs showed they were willing to pull out all the stops as they used a swinging-gate formation on the first drive to befuddle the Panther defense. However, the Bulldogs would be stopped in their first drive and for much of the night by penalty flags. Simply put, both teams accumulated a mountain of penalty flags for nearly every infraction in the rulebook as they combined for well over 200 penalty yards. That would make for quite the long game, as the first half clocked in at an hour and 45 minutes long and the final horn not sounding until after 10:30.

Brookhaven had a short field on their first drive after Natchez mishandled the snap on their first attempt. Brookhaven running back Damarrell Leggett leapt over the Natchez defensive line from 1-yard out to put the Panthers up 7-0 with 9:41 remaining in the first quarter. Leggett would add an 11-yard scoring run just five minutes later to put Brookhaven up 14-0. The score was set up by a pass from Sevante Quinn to Dorian German that got Brookhaven deep into Bulldog territory.

The Natchez offense, led by long, lanky Chris Scott at quarterback would begin to cook after spotting Brookhaven a two score lead. Using wide receiver Shavoke Herrington on jet-sweeps, running back Ernest Woods on stretch runs, and the scrambling ability of Scott, the Bulldog offense gave the Panther defense fits all night long.

Scott scored on a 2-yard touchdown run to put Natchez on the board with 11:51 remaining in the second quarter. Brookhaven’s Don Blandon would run the ensuing kickoff back 78-yards for a touchdown. Natchez bounced right back with a 28-yard touchdown run by Devante Stancel.

The Panthers would then fumble the kickoff and Natchez would quickly score on a 28-yard screen pass to Woods. Brookhaven would take control of the game with two scores in the last five minutes of the half. A 30-yard Jaquarius Edwards touchdown run with 5:19 remaining in the first half would put Brookhaven up 28-21. With just 35 seconds left in the half Quinn would add a 15-yard rushing score and Brookhaven led 35-21 at halftime.

Quinn added another score, this one on an 18-yard rush in the 4th quarter, but Natchez was not done and with 3:30 remaining in the game the Bulldogs scored on a 60-yard touchdown pass to pull within 42-33.

“We made a lot of mistakes tonight. It was an ugly win, but it still goes down as a win,” said Brookhaven head coach Tommy Clopton.