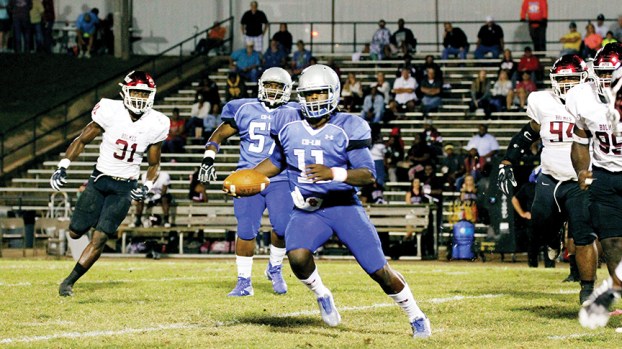 The Wolves of Copiah-Lincoln Community College made a strong push late in the contest Thursday night, but were unable to the overcome Holmes Community College rushing attack as the Bulldogs left Stone Stadium with a 35-27 victory. The loss moves the Wolves to 3-4 on the year, however the North and South matchup did not affect Co-Lin’s 1-3 division record. With the win the Bulldogs improve to 5-2 on the season.

The Wolves could not ask for a better start as Dematre Collins returned the opening kick off 77 yards to the Bulldogs’ 13-yard line. Just three plays later Deion Dampier punched it in from four yards to put the Wolves on the board. Griffin Sublett hit the point after attempt to give Co-Lin a 7-0 lead just a minute and 10 seconds into the game.

Holmes quickly answered with a nice return on the ensuing kickoff that started the Bulldogs’ drive on Co-Lin’s 42-yard line. Jesse Wilson and Cameryn Brent traded carries as the Bulldogs marched down the field before Matthew Pleasant drove it in from three yards out. Connor McKay tied the game with the extra point with 10:42 remaining in the opening quarter.

Holmes stretched their lead to 14-7 after taking advantage of a Co-Lin fumble. Wilson connected to Steven Burdette for a 29-yard touchdown pass with 2:47 remaining on the clock in the first quarter.

Early in the second quarter, the Wolves looked to return the favor after recovering a Holmes fumble at the Bulldogs’ 43-yard line. Woody Barrett found TK McClendon down the seam for a 47-yard touchdown, but the play was called back due to illegal motion.

Following the called-back play, Sublett pinned the Bulldogs’ at their 10-yard line after a booming 42-yard punt. Holmes took the air out of Stone Stadium as the Bulldogs went on a six minute 50 second, 11-play drive that was capped off with a Brent touchdown from 11 yards out. The score and extra point gave Holmes a 21-7 lead with 5:30 remaining in the half.

Co-Lin found a way to bounce back. The Wolves strung together a nice drive and took it 66 yards in four minutes. Barrett called his own number in the redzone and ran it in from seven yards out to finish the drive. With the extra point the Wolves cut Holmes’ lead to 21-14 heading into the locker room.

Late in the third, Co-Lin found the end zone yet again. Collins took it around the edge from nine yards out with 3:34 remaining in the quarter. Sublett tied the game at 21 with the extra point.

The Bulldogs fought back late in the quarter. Sanchez Berry scampered 41 yards on a sweep to the outside to give Holmes a seven-point lead once again with just 24 seconds remaining in the third.

In the fourth quarter Co-Lin put together another impressive drive. The 10 play 68-yard march was once again capped off by a Barrett rushing touchdown, this time from 10 yards out. Holmes’ Brylon Fowler blocked the ensuing point after attempt to give the Bulldogs a 28-27 lead with 10:41 remaining in the game.

Holmes pulled away to a 35-27 lead later in the fourth, as the Bulldogs’ quarterback found Kavonta Younger for a 36-yard pitch-and-catch with just under six minutes remaining in the contest.

The Wolves threatened late. Barrett led Co-Lin down the field in the final minutes of play. Unfortunately the Wolves stalled at Holmes’ 23-yard line and Co-Lin had a turnover on downs with 2:19 remaining.

Barrett was 14-for-24 in the air for 157 yards with no touchdowns or interceptions. The freshman also led the Wolves with 101 yards on the ground with two scores.

Dampier had 28 yards on eight carries and a score for Co-Lin, while Collins found the end zone from nine yards out on his only rush of the night. Jalen Browder led the Wolves’ receivers with three catches and 42 yards. Collins had 35 yards on two receptions, while Kobe Gates posted 32 yards on two catches as well.

Wilson was 4-for-6 in the passing game for Holmes with two scores. Brent led the Bulldogs on the ground with 176 yards on 35 touches.

Co-Lin is back in action Thursday as the Wolves travel to Summit to take on the Southwest Community College Bears. Kickoff is set for 6:30 p.m. Fans can listen to the action live at colinathletics.com or follow updates by following @colinathletics on Twitter.

Wesson has made it to round three of softball playoffs. It took the Lady Cobras eight innings and a grand... read more