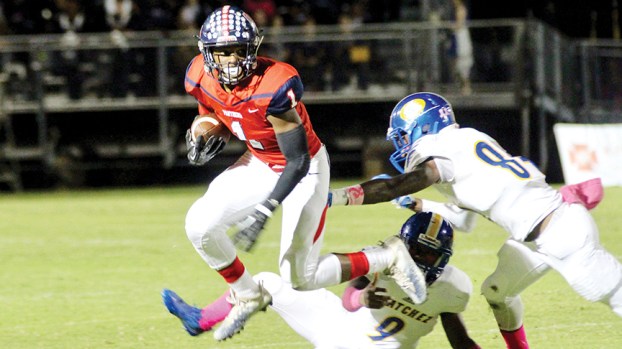 Photos by Katie Furr/Brookhaven remains on top in the Region 3-5A standings after the Panthers’ defeat of Natchez on Friday. Senior running back Damarrell Leggett (1) gets airborne as he is pursued by Natchez defenders.

Brookhaven still sits atop the Region 3-5A standings after another win Friday. The Panthers are tied for the top spot with West Jones, which also sports a 4-0 region record.

South Jones sits at third with a 3-1 record and Laurel is in fourth at 2-2.

The Panthers continue to hold the top spot in most statistical categories in the region. Damarrell Leggett is leading the district in rushing yards with 916. Panther Jaquarious Edwards is close behind with 876.

Leggett is also tops in the region in total points with 108. Panther kicker Tyler Mixon is in third with 60 points. Leggett also leads the total TDs category with 17. Edwards is in third with eight.

Defensively, the Panthers don’t lead a category but are close. Byrion Robinson is in fourth place with 49 tackles. Dahauntre Hill is in fourth in sacks with three.

Brookhaven Academy is tied for second place in MAIS AA District 4 with a 1-1 record. Quarterback Dawson Flowers is first in the district in passing with more than 1,800 yards. No one else even comes close, with the second-place QB racking up only 382 yards.

Brown also tops the list in total points with 74. Logan Murray of BA is in the No. 2 spot in rushing yards and the No. 3 spot in total points. Brown leads with 12 touchdowns, followed by Murray with 10 and Tanner Waldrop with nine.

Cougar Nick Ogden is second in tackles with 71.

Though Wesson sits in last place in the Region 8-3A standings, standout Dell Thigpen does not. Thigpen leads the district in rushing yards, total points and total TDs. Teammate JaQuavion Harris is second in total points and TDs.

Trey Glasper of Wesson is third in the region in tackles with 71.

In Region 7-2A, Loyd Star has the No. 2 spot, followed by West Lincoln, Bogue Chitto and Enterprise.

Loyd Star’s Patrick Price leads the region in rushing yards with 821, total points with 84 and total TDs with 14.

Lawrence County sits in last place in Region 7-4A with a 0-3 record. Kendarius Feazell is in fourth place in the points category with 54. He’s also third in TDs with nine.

Cougar Brian Bogan is second in sacks with six, and Ikeem Showers is third in interceptions with three.

State roundup: How they fared