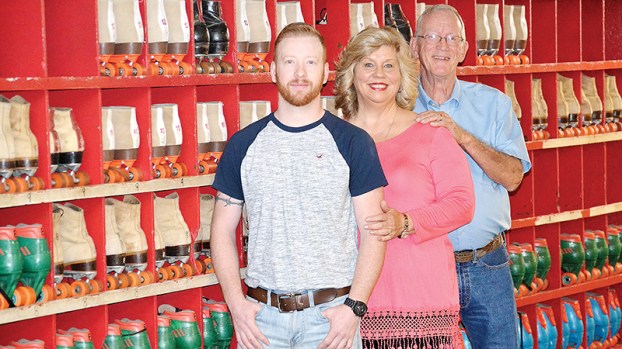 Third generation takes the reins at the rink in Brookhaven

For Robbie Nettles’ 10th birthday, he scored his first pair of roller skates. When he turned 30, he got the whole rink.

Nettles’ gift to himself this year for the big 3-0 was to buy Brookhaven Skating Rink from his aunt and uncle, Delores and Ronny Havard. The Havards were the second generation to own the business. Now Nettles will be the third.

It’s a dream come true for Nettles, who is a radiologic technologist in Jackson. The Brookhaven man also started his own company earlier this year, renovating and renting houses in his neighborhood.

His grandfather would be proud to see the wheels keep rolling in his family.

Dewayne Nettles opened Brookhaven Skating Rink in 1972 on Calcote Loop off Industrial Park Road. Before that, he operated a portable skating rink he’d bought in south Louisiana in 1959. He traveled with it, making stops everywhere in Southwest Mississippi from Tylertown to Bude.

“By the time she was 16, 17 months, she could skate with the best of them,” Nettles told The Daily Leader during their 40th anniversary celebration in 2012.

“If they’re from Lincoln County and skated anytime in the last 50 years, they did it with me,” he said.

She was a working wife, mother and grandmother selling television ads in the early 2000s. She and her husband began to pray about buying the skating rink someday. She never talked to her father about it. Two weeks later, her dad called her and asked if they’d be interested in buying the business from him. She bought it Sept. 18, 2009. A few weeks later, she was told that her position was phased out and she found herself without a job.

She was OK with that because she had the skating rink.

“God truly has blessed us,” she said. “I want to give God the glory. We want to thank everybody who has come skating and supported us and fun, family times for the past eight years.”

When the Havards took on the responsibility of running the skating rink, Ronny Havard had been retired for five years. But his wife put him back to work.

With Robbie Nettles taking over, he can punch out again.

After he received that first pair of skates, Nettles’ home away from home was his grandfather’s skating rink.

“From then forward I was out here as much as I could,” he said. “My mom worked here in the concession and my dad grew up helping his dad and Aunt Delores as well. It’s a family tradition, and I’ve always wanted to do it.”

But he didn’t think he’d actually own it someday. His aunt mentioned to her brother a year ago that she might want to sell. Her brother — Nettles’ dad — told his son.

“I did not want it to be just anybody because I didn’t think I could just walk away,” she said. “I was very satisfied knowing it was Robbie. It’s a dream come true for Robbie and it’s a blessing for us to be able to retire.”

Havard said her father “would be smiling down from heaven at a third generation” — running the rink.

“It’s perfect timing for us and for him,” she said of her nephew. “It’s bittersweet, but we’ll be back. We’ll continue to come and bring our grandchildren.”

Both Nettles and his aunt see divine intervention in the sale.

“Our entire journey has been God all the way,” he said.

“We’ve seen him one step ahead of us on the entire process,” she said.

“He literally has taken our hand through the whole process,” Nettles added. “It’s been a big leap for me too, but every fear that I’ve had and anxiety, he’s just taken us on through.”

The Havards have 29 grandchildren between them to keep them busy.

“We’re going home to begin a new journey and live,” she said.

Lt. Governor Tate Reeves, whose family has roots in Bogue Chitto, will be visiting Brookhaven Wednesday to tour the area... read more