A memorial service for William “Bill” Fuller, of Jayess, is today, Oct. 17, 2017, at 2 p.m. at Forest Grove Methodist Protestant Church in Jayess. Wilson Funeral Home in Monticello is in charge of arrangements.

Visitation will be today, Oct. 17, 2017, from noon until time of service at the church.

Mr. Fuller, 78, died Saturday, Oct. 14, 2017, at his residence. He was born Jan. 22, 1939, in Jayess to Johnnie and Hazel James Fuller. He retired from Halliburton after 41 years. He enjoyed spending time with his family especially his grandchildren and great-grandchildren. He was a member of Forest Grove Methodist Church. He enjoyed farm life raising cattle and horses.

Preceding him in death were his parents; brothers, Edward and Mack Fuller; and sister, Lucille Kalous. 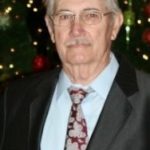