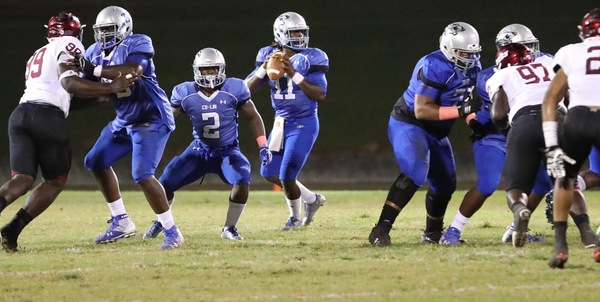 Photo by Co-Lin Athletics/Freshman Wolves quarterback Woody Barrett (11) drops back looking for his intended receiver in a recent game, as freshman running back Rico Owens (2) guards him.

The Copiah-Lincoln Community College Wolves (3-4, 1-3) travel south this Thursday, October 19 as the Wolves take on Southwest Community College (0-7, 0-4) in Summit at 6:30 p.m. The matchup is the 76th meeting between the two programs dating back to 1937.

Last season Co-Lin stretched its all-time series lead to 47-27-1 after a 30-20 win in Stone Stadium on homecoming weekend. The Wolves enter this year’s contest in search of win after falling to Holmes Community College 35-27 last Thursday in Wesson. The Bears are coming off 52-13 road loss to the Mississippi Gulf Coast Bulldogs.

The Wolves offense was efficient last week as Co-Lin tallied 332 yards on 52 plays, an average of over six yards per play. The Wolves rank eighth in the MACJC in total offense with 2,428 yards, while the Bears of Southwest rank eleventh with 2,240. Defensively, Co-Lin still leads the league in yards allowed with just 283.6 per game. Southwest is tenth after giving up an average of 425.6 yards per game. Another stat to note is points allowed per game. The Bears are fourteenth in the league with 45.9 points allowed per game, and the Wolves are fifth with just 20.4.

Co-Lin’s signal caller, Woody Barrett, is coming off a solid performance against Holmes. The freshman was 14-for-24 in the passing game for 157 yards, and posted two rushing touchdowns as he racked up 101 yards on the ground. Deion Dampier was second on the team in both carries and yards last week as he gained 28 yards on eight touches. The Mendenhall High School graduate also had one touchdown on the ground.

Barrett was able to spread the ball around last week as nine different receivers made receptions. Jalen Browder, who hauled in three catches for 42 yards, led the Wolves. DeMatre Collins added 35 yards on two catches and Kobe Gates posted 32 yards on two receptions as well.

Defensively, Co-Lin was led by several solid performances despite the loss. Swayze Bozeman and Charles Cameron wrapped up 10 tackles each. Cameron also had one sack and a fumble recovery. Sh’Mar Kilby-Lane had eight tackles and Jakaiszer Glass posted seven tackles in the contest. Barry Howard also had a stellar performance as he posted three tackles, two and a half sacks, three tackles for loss, and a forced fumble.

Fans can listen to Thursday’s matchup live at colinathletics.com or WMJU 104.3 FM in Brookhaven. For updates throughout the game follow @colinathletics on Twitter.

Brookhaven’s Leo Lewis has not had the kind of production at the linebacker position this season that he saw last... read more