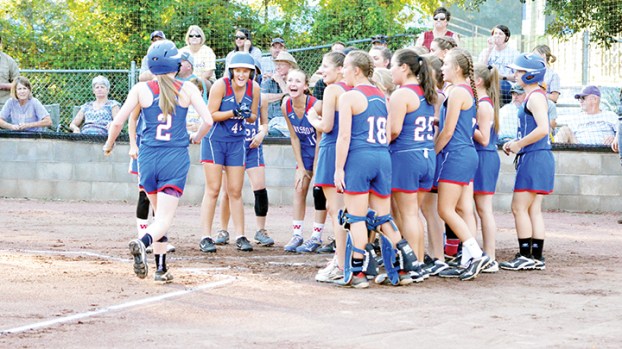 The Wesson Lady Cobras fought their way to the semi-final round of softball playoffs before falling to the powerful bats of Newton County High School in two games, 20-2 and 22-6 on Tuesday.

Shalyn Green started the game for Wesson as pitcher. She lasted four innings, allowing 22 hits and 20 runs while walking none.

Anna Claire Crow went 2-for-3 at the plate to lead the Lady Cobras in hits.

Wesson started a little slow on the bats in the first inning, though Anna Claire Crow singled. The Newton County Lady Cougars came out hard in the bottom of the inning, racking up six runs.

Catherine Wilson got two outs for Wesson and Nikki Guess made the third.

In the second inning, Wesson was not able to connect well with the bat. But in the bottom of the inning, Wilson and Guess repeated their defensive activity in outs.

In the top of the third, Wilson singled and Shalyn Green doubled on a line drive. However, neither scored.

In the bottom of the third, the Lady Cougars set their bats on fire, doubling their lead from 10 to 20 before Guess and Crow could get the outs.

Wesson finally got on the board in the top of the fourth, when Amber Brinson scored on an RBI from Laynee Crapps. Then Brooke Jones scored when Bre Westbrook walked, bringing Wesson up to a score of 2.

In the bottom of the inning, Jones caught a fly out and Shelbi Maxwell made a double play to end the inning.

Wesson couldn’t add to their score in the fifth, and the game ended after the top half with the Lady Cobras down 2-20.

Green started on the mound for the Lady Cobras once again. She lasted five innings, allowing 23 hits and 22 runs.

Once more, Crow led Wesson at the plate with two hits in three at-bats.

Maxwell caught a pop fly out. Guess got a double play with Wilson. Newton County led 2-0.

In the bottom of the first, Crow singled but the Lady Cobras couldn’t score.

Westbrook and Guess made the outs in the top of the second to keep the Lady Cougars at bay. Guess and Crapps hit singles, and Guess scored on an RBI from Westbrook. Crapps scored on a sacrifice from Green.

Wilson scored on a line drive from Crow. Then Westbrook scored on a ground out from Brinson. Wesson ended the inning up 4-2.

In the third, Newton County scored on an RBI. In the bottom, Maxwell hit a single. The inning ended with Wesson still ahead 4-3.

In the fourth, the Lady Cougars brought out their fire once again and added 19 runs to bring the score to 22-4. Crapps, Guess, Green and Maxwell each had one error. Guess caught a fly ball to end Wesson’s misery for the inning.

In the bottom, Green homered on a fly ball to right field, giving Westbrook an opportunity to score as well.

In the fifth and final inning, despite one error, Wesson kept the Lady Cougars from advancing in score.

Brandon, Jones and Guess hit line drives and a pop to get three quick outs and end the game.

Newton County will play  Nettleton in Ridgeland Saturday for the Class 2 state championship.

Enterprise (Clarke County) will face Hamilton for the Class 1 championship.

Wayne County will face off against Neshoba Central for the state championship in Class 3.