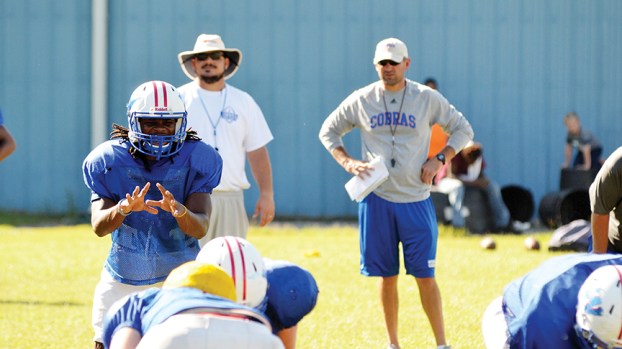 Cobras hoping for a little chaos

Down from college football — where top teams were upset in surprising games last weekend — to high school football, where his Wesson Cobras are playing host to the perpetual regional bully, Tylertown.

“Syracuse beat Clemson on the other night. Nothing is impossible,” Loy said. “When you roll that ball out there, there’s always a chance until the buzzer goes off if we just play hard until the end.”

Though the record says the visitors aren’t as dominant as they’ve been in previous years, the Tylertown offense under senior quarterback Da’bryan Magee is churning out statistics — he’s thrown for 1,100 yards and eight scores this season while rushing for 867 yards and another eight touchdowns.

Loy and the snakes have a plan to try to limit Magee’s production. He’s not going to describe it beforehand, of course.

“We have a few things we’re gonna try, see if we can execute them,” he said. “It will take a really great game on our part to have a chance to win it. We’re just going to focus on one play at a time.”

Loy also hopes to go back to the well and draw up a bucket of production from his leading players. He bragged on senior quarterback Dell Thigpen, an even match to Tylertown’s Magee. Thigpen is putting up similar numbers, just the other way around — he’s rushed for 1,154 and 13 touchdowns while throwing for 449 and another three scores.

Junior running back Ja’Quavion Harris has rushed for 809 yards and hit paydirt 10 times, and junior Jim Guess is heavily involved on defense.

“One of the better defensive kids I’ve been around,” Loy said of Guess. “All the junior class is — a tough, gritty group of ball players.”

All the Cobras will need to be gritty if they’re going to propel Wesson into the postseason. The team is winless in the district and not in control of their destiny — getting into the playoffs will require a win Friday night, another win next week and some backroads-voodoo to affect other teams holding the tie-breakers.

It’s disappointing for Loy and the Cobras, who have been in some close games in 2017. Seminary and Columbia put the hurt on them, no doubt, but their other losses were by an average of just 11 points.

“It’s hard to keep grinding and keep working when you’ve been disappointed, but that’s the great thing about football — it teaches kids the skills to get back up and keep fighting,” Loy said. “We’ve lost some really close games, and we want to win them next year.”

Story by Adam Northam There won’t be any playoffs for the Lawrence County Cougars, but they will have a chance... read more