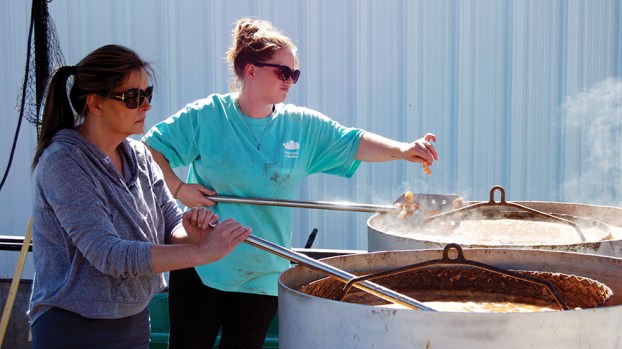 The women of Junior Auxiliary of Brookhaven come prepared on shrimp picking day.

Their hair is up in ponytails and they’re dressed in T-shirts, yoga pants and tennis shoes, although some of the repeat pickers wore galoshes with their sweats Wednesday. Plastic gloves complete the ensemble. It’s a look that’s learned through years of experience.

Club members put in a long day preparing for their grand fundraiser today.

They worked with precision on an assembly line, scooping and plopping potato salad into cups, which were placed back onto refrigerated trucks. Some picked through pound after pound of shrimp, tossing out the less shrimpier shrimp for quality control. Still, others bagged the crustaceans and weighed them to make the plate assembly easier today. Each bag held 10 pounds of shrimp.

Each plate gets a pound of boiled shrimp prepared by K&B Seafood, baked potato salad, spicy corn on the cob and crackers with cocktail sauce. Becky Allen with K&B said they donate their services to cook the 2 1/2 tons of shrimp for the Junior Auxiliary. That’s done on-site with their big rig cookers. They boil the corn in seasoned water at their shop and bring it over.

The JAs will spend this morning getting all those plates for the “Peel ‘Em & Eat ‘Em” shrimp ready for pickup, which is 3-7 p.m. at the Lincoln Civic Center.

That’s a new location for the JA fundraiser.

“It’s the first time in 30 years it will be somewhere else,” said JA spokeswoman Katie Furr.

Organizers made the change to create a smoother traffic flow for plate pickups. Even with some additional space, the meals are still pick up only, Furr said. However, the additional space at the civic center allowed the JAs to expand the Sweet Shoppe which will serve home baked goods from full-size cakes to individual servings for sale by cash or check only.

Many are made from treasured JA recipes, like the Mississippi mud cake which has been a stable of the Sweet Shoppe for all 30 years.

Tickets are $15 but only about 200 are available. Furr’s suggestion for those without tickets in hand is to be at the Lincoln Civic Center at 3 p.m. to get plates.

The dinner funds the group’s projects for a full year.

“We raise enough money from this one fundraiser to fund all of our projects for the whole year,” JA President Juliana Adams said recently. “And the community enjoys it. It’s something different.”

Member Anna Johnson said they start each sale day the same — pray then plate. Once the take-out containers are packed, they go back on the trucks until its almost time for pickup to start. Then they’re brought out continually as needed.

The 47 active JA members get a lot of help that day — life members, husbands, significant others and members of the Exchange Club of Brookhaven all pitch in.

“It truly is an impressive process to see how it’s all organized,” Furr said.

Since 1954, Junior Auxiliary of Brookhaven has been dedicated to helping the children of Lincoln County. From literacy initiatives to financial support and everything in between, the dedicated women of JA strive to help support future generations.

“We are a group of ladies with servants’ hearts,” Adams said. “We want Brookhaven and Lincoln County to be the best that it can be. We use this opportunity and the financial resources we get from it to make a difference in our community.”

If someone wants to be heard by the Brookhaven Board of Aldermen, they need to set it up the week... read more