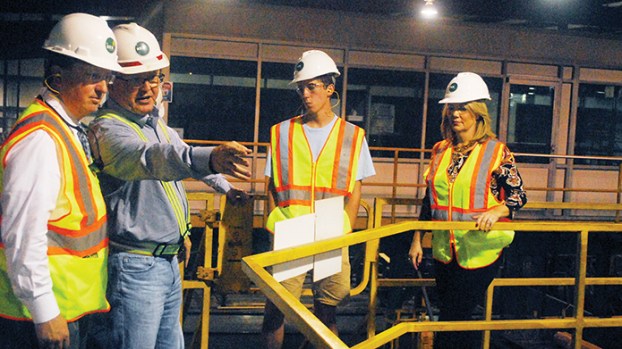 Photo by Matt Rushing/From left, Lt. Gov. Tate Reeves observes as Rex Lumber general manager Doug Boykin guides him on a tour of the Rex facility Wednesday. They were accompanied by Sen. Sally Doty and her son, Ben Doty.

Though already familiar with Lincoln County — his parents graduated from Bogue Chitto High School —  Lt. Gov. Tate Reeves came away impressed after his tour of the area Wednesday.

He first made his way to Copiah-Lincoln Community College where he toured the skills training programs on campus, then headed to Brookhaven. The visit was set up by Sen. Sally Doty, R-Brookhaven, so she could brag on Lincoln County and also show Reeves where the needs for her district are.

“I wanted him to come down and get to see what we have going on down here,” Doty said. “I also wanted show him some needs that we have here.”

Reeves likes what he saw in Brookhaven.

“The downtown area is incredibly impressive, which tells me this is a thriving community,” said Reeves. “I had a chance to see some of the capital investment in downtown.”

Reeves visited Hurst Review Services and then walked the hallways at Brookhaven High School. He was impressed with the teachers and administrators he met.

“I become more optimistic about the future of our state when I see the kind of programs that our young people are going through,” said Reeves. “We have challenges just like everyone else has challenges, but to see that they’re getting students in the specific areas where they need to be in, whether it’s advanced AP physics, workforce training programs or dual-enrollment programs, it’s encouraging to me that administrators are doing what’s best for kids and that’s what I like to see.”

Members of Servitium, Lions and Rotary clubs met Reeves for lunch at Porches of Brookhaven at the Brookhaven County Club to hear him discuss his views of state government.

Reeves encourages those in the private sector to invest capital and create jobs. His goal is to bring better and higher-paying jobs to Mississippi.

His tour took him to King’s Daughters Medical Center in the afternoon.

“There’s a lot of community leaders that have poured their heart and soul to ensure that Brookhaven and Lincoln County have a viable hospital,” Reeves said. “It’s a challenging environment under Obamacare, but this is a very well-operated hospital.”

On his last stop of the day, Reeves took in Rex Lumber. He said Rex is a perfect example of the private sector investing capital and creating jobs.

Rex General Manager Doug Boykin led the tour of the facilities for Reeves and Doty.

“Rex has created more that 158 jobs in this community,” Reeves said. “This is critically important to the long-term viability to the community. This is a real life example of capital investments and jobs being created in the community.”

Lt. Gov. Tate Reeves spent a half-hour Wednesday laying out his views of state government during a joint meeting of... read more