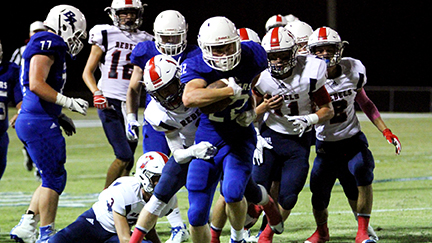 It’s the first time the Cougars will make the playoffs since 2012.

The Cougars and Rebels traded punches on three consecutive drives.

Senior running back Tanner Waldrop scored the Cougars’ first touchdown with six minutes left in the first quarter to give BA a 7-0 lead.

ASC quickly answered with the addition of a two point conversion to take an 8-7 lead. On the following drive, Waldrop ran 53 yards to give the Cougars the lead again.

Waldrop tacked on another touchdown in the first half to give him three touchdowns.

A big defensive stand by the Cougars prevented the Rebels from scoring near the end of the half. BA trailed at halftime 24-21.

On the first play of the second half Waldrop scored again on a 68-yard run. He added his fifth touchdown of the game with six minutes left to go in the third quarter to give BA a 35-24 lead.

ASC tacked on a late third quarter touchdown to narrow the Cougars’ lead.

Waldrop sealed the deal for the Cougars in the fourth quarter by scoring his sixth touchdown on the night. He rushed for 261 yards on the night.

The Cougars finished off the Rebels, winning 42 to 32. Waldrop finished with six touchdowns on senior night. BA will host a playoff game Friday against an opponent to be determined.