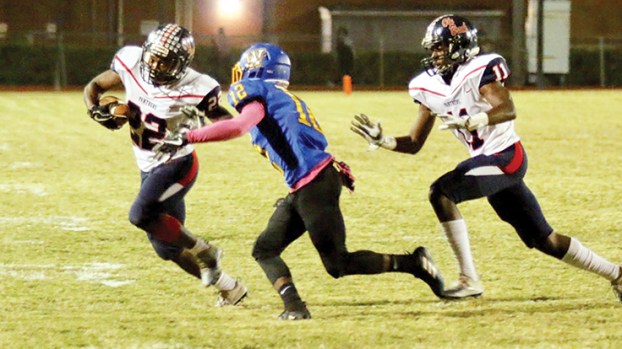 The Brookhaven Panthers (8-1, 5-0) had little problem rolling over the Wingfield Falcons (2-7, 1-4) 48-12 on Friday night in Jackson. The win was the eighth straight for the Panthers who sit tied atop the region standings with the West Jones Mustangs (30-21 winners over South Jones on Friday night).

Sophomore running back Jaquarius Edwards was a one-man wrecking crew for the Panthers against the Falcons as he rushed for 173 yards on 19 carries and scored four rushing touchdowns. Edwards ran in three scores from 5-yards out and another score from 25-yards, all in the first half, to push Brookhaven to a 35-0 halftime lead. Brookhaven kicker Tyler Mixon finished 6-for-6 on PAT kicks. Edwards’ third score would be set up by a fumble recovery grabbed by Brookhaven’s Axavian Jones. Freshman running back Gabriel Burnett ran the ball four times for 28 yards and scored his first career touchdown on a 10-yard burst that capped the Brookhaven scoring in the final period. Junior signal caller Sevante Quinn finished 6-for-13 for 53 yards through the air including a 10-yard scoring pass to John Hilbert. Quinn also scored once on the ground, a 7-yard scamper in the fourth quarter.

“We’ve got a big one next week against South Jones at home on our Senior Night,” said Panthers head coach Tommy Clopton. “I thought JQ (Edwards) did a great job and our offensive line really controlled things tonight for us.”