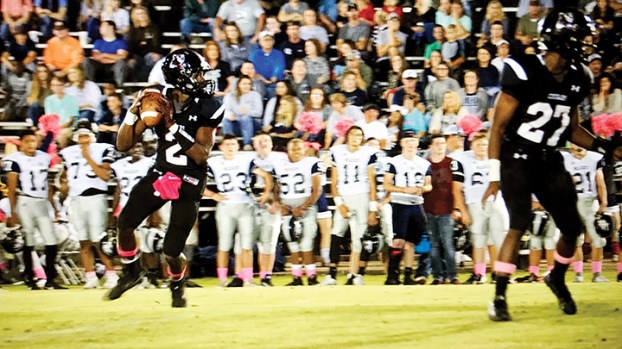 Photo by Jana Harp/Cougars quarterback Kendarius Feazell readies for a pass during an October loss to Greene County.

Greene County scored first with a TD and an extra point. The Wildcats hit them with another touchdown but missed the point after, going into the second quarter 13-0.

The Wildcats rushed for a touchdown with a missed point after, but then Lawrence County completed a TD pass with six minutes to go heading into halftime. They completed a 2-point pass to bring the score to 19-8.

With just three minutes to go in the second, Greene County completed a TD pass for a touchdown, and added an extra point. With less than a minute left the Wildcats completed another pass and an extra point after. It was 33-8 as the players headed to the field house.

The Cougars came out strong, completing a pass for a TD and moving the score to 33-14.

The momentum slowed soon after though, and Greene County rushed for a 5-yard TD and made the point after to bring it to 40-14.

Greene County added to their score with an 18-yard rushing touchdown but missed the PAT.

Lawrence County rushed for a touchdown with under a minute to go. Their 2-point conversion failed and they ended the game 46-20.

“We gave up too many plays on defense,” said head coach Jaymie Palmer. “We’re not physical enough in either line of scrimmage.”

He said the Wildcats were the better team Friday night.

“Greene County has a good club,” he said.

Copiah-Lincoln Community College moved to 4-4 on the season and 2-3 in the MACJC South Division Thursday night as the... read more