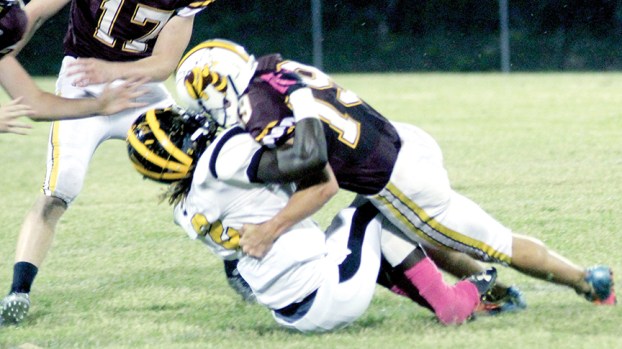 Photo by Katie Furr/Enterprise Yellow Jacket Jordan Stephens (19) takes down a Trojan in Friday night’s game as Gabe Haggard (17) and others close in to assist.

The Enterprise Yellow Jackets were manhandled at home on senior night by the bigger, stronger Trojans from Amite County, managing only 20 points as the visitors wracked up 53.

The problem for the Jackets on senior night? Not enough seniors.

“We have a lot of young kids at the skill positions, and Amite County has some big guys who can go get the ball,” said Enterprise head coach Brooks Burns. “Our kids can’t defend that size — they try, they’re in position, but they get out-athleted because of their lack of size.”

There were some bright spots for Enterprise despite the big difference on the scoreboard. Junior Javonte Jenkins ran the length of the field on a kickoff return for a touchdown, and junior Bryce Jackson took a reverse play into the end zone for more Yellow Jackets points.

With the loss, Enterprise falls to 1-8 on the year and remain winless in district play. Next week’s regular season-ending district game at Bogue Chitto will offer the jackets their last hope at reaching the postseason.

Burns is thankful that, despite the losses, his young team has remained healthy so far in 2017 and learned hard lessons along the way.

“It’s difficult right now, but they’re gaining a lot of valuable experience that, in a couple of years, is going to pay off big for them,” he said. “They play hard every week, and the have all year.”