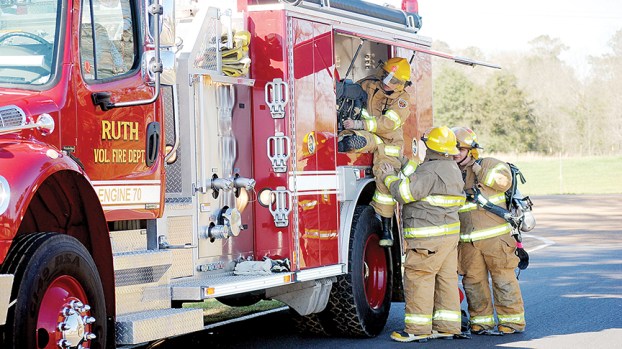 Photo by Donna Campbell Fire fighters with the Ruth Volunteer Fire Department participate in a training exercise in March at Enterprise Attendance Center.

Three Lincoln County volunteer fire departments saw a drop in their classifications from the Mississippi State Ratings Bureau, which will mean lower insurance premiums for homeowners in those communities.

Hog Chain, Bogue Chitto and Zetus all received a 7 rating, which is down from an 8 for each of the three. Classifications for fire departments range from a 1, which is best, to a 10. The lower the rating, the better prepared the fire department is to handle an emergency situation, said  Lincoln County Emergency Management Director Clifford Galey, who is also the county’s fire coordinator.

“I’ve actually heard from several people that have told me going from a class 8 to a class 7 saved them somewhere in the neighborhood of $400 on their insurance policy,” Galey said.

Loyd Star VFD remained at a Class 8 rating. He said the department’s rating didn’t drop because of the age of its fire truck, which is over 20 years old. The department is in talks to purchase a new truck.

The ratings bureau looks at the departments’ trucks, equipment, number of firefighters, records and water availability to determine the classification.

“A 6 classification is probably the lowest we could get to for our VFDs, because once you get lower than that you’re going to have to start hiring paid people,” said Galey.

Volunteers are needed at all of the community fire departments, he said.