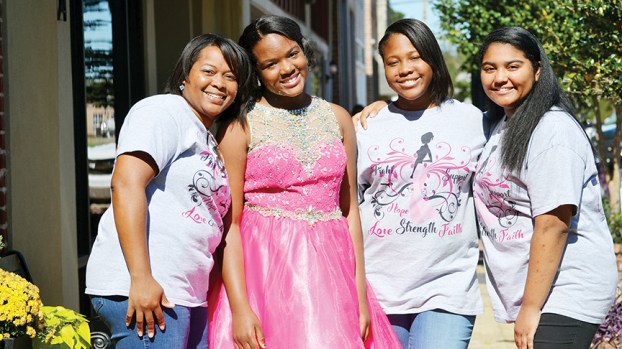 Photo by Donna Campbell/The non-profit A Night of Hope is hosting the first ever Hollywood Bling in Pink fashion show and gala to raise money for travel expenses for cancer patients seeking treatments. Pictured are, from left: Daisy Watkins and daughter Aliyah Watkins, Akura Brown and Amira Al-Rai.

When Akura Brown’s grandmother died two years ago Saturday from breast cancer, the 12-year-old felt a loss so big it nearly swallowed her up.

But she decided she’d turn that sadness into something positive to help other women fighting the disease.

Brown, now a freshman at Brookhaven High School, is the founder of A Night of Hope, a non-profit organization created to help cancer patients feel like people.

“Our foundation is helping people feel like people, not just patients,” she said.

The 14-year-old is planning a fundraiser to provide money to cancer patients to help with transportation costs and meals while traveling for treatments.

“When they go back and forth for their cancer treatments, it can get pricey with gas and most days they have to eat fast food,” she said.

Her foundation is hosting the “Hollywood Bling for Pink” fashion show and gala Saturday on the anniversary of her grandmother’s death.

The event will be at the Brookhaven Building, 1154 Beltline Drive, beginning at 6 p.m.

Brown said VIP guests receive gift bags of merchandise, special seating and waiters to serve them rather than stand in the buffet line.

The meal will be provided by Elegant Catering. A silent auction is also part of the gala.

Guest speaker of the night is Dr. James Hall.

For tickets, donations or sponsorship information call Tracy Brown at 601-757-0273. She will also take information by phone for anyone who wants to apply for financial assistance from the non-profit.

Akura Brown has wanted to do a fashion show since the fourth grade. When her grandmother Louella Sanders died, it gave her a purpose.

“I guess when my mom passed it gave her an idea. She had a purpose to do it,” Tracy Brown said. “Her aunties suggested doing it to help with transportation.”

Those great-aunts — four of Sanders’ nine sisters — were all diagnosed with breast cancer. Only Sanders has died from the disease.

Brown hopes to raise awareness about the disease at the gala as well. She’s asked Dr. James Hall to speak that night.

Brown, who serves on the student council and is president of the freshman class, is determined to make a difference in her community. She’s already raised $500 for her foundation by selling candy at school. She’s also collected donations from local merchants for the silent auction.

Several dress shops have donated the use of pink gowns for the fashion show, she said.

Brown won’t be modeling because she’ll be too busy directing the action, but her friends from school, family members and two of her great-aunts who are breast cancer survivors will be taking turns on the catwalk.

She is hoping her foundation will be able to help people worry less about traveling expenses so they can focus on successful treatments. She wants to help as many people as possible.

“We’ll do it as long as they have the funds,” Tracy Brown said. “That’s why we’re trying to raise the money.”

“The main focus is breast cancer but we’re open to helping anyone,” Akura Brown said.