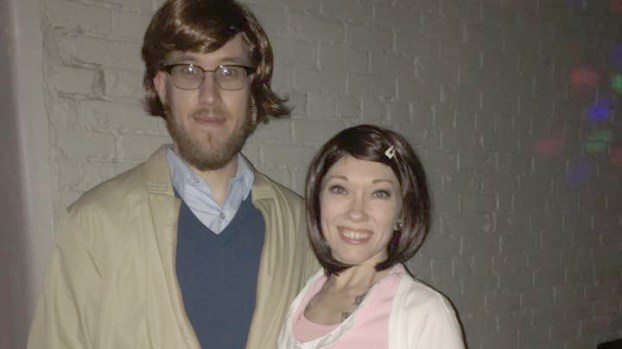 Submitted photo/Ricky and Addie Erwin of Wesson attended the first “Rocky Horror” showing in 2016 as Brad and Janet, the main characters in the campy cult comedy. Brookhaven Little Theatre will screen the movie Saturday at The Haven.

Learn to do the “Time Warp” on Saturday at the Brookhaven Little Theatre’s second annual screening of “The Rocky Horror Picture Show.”

The Haven is hosting an interactive screening of Jim Sharman’s cult horror comedy Saturday from 7-9 p.m.

Audience members should come ready to sing, laugh and holler, because this production won’t be the typical theatergoing experience. It will involve a slate of interesting movie-themed activities, including a dance sequence led by performers from Showstoppers Studio of Dance.

The screening is designed for maximum crowd participation and moviegoers will receive goody bags filled with special props to use during the show. Before the film starts rolling, the theatre staff will help set the mood by explaining how and when audience members can take part in the onscreen action.

“Anybody who’s ever experienced ‘The Rocky Horror Picture Show’ knows what they’re getting into,” said Troy Douglas, a member of the Brookhaven Little Theatre’s board of directors. “But for anyone who hasn’t, we want to give them an idea of what’s in store.”

The evening will include an audience costume contest, and everyone is encourage to come dressed as their favorite “Rocky Horror” character. There will even be a designated area where people can take cinematic selfies to share with their friends on Facebook.

Douglas said moviegoers should “expect a slightly darker ambiance” with lighting designed to match the film’s campy aesthetic. With this production, the Haven hopes to provide a somewhat edgier Halloween experience than Brookhaven normally offers. It will serve as a fun alternative for people looking for an interesting way to spend an autumn Saturday night, he said.

“For example,” Douglas said. “If you’re 26-years-old and you don’t have a wife and kids, what are you going to do for Halloween in Brookhaven? Why not come and see ‘The Rocky Horror Picture Show’ and have a good time?’

Since its initial theatrical release in 1975, “Rocky Horror” has become one of the best-known cult classics in motion picture history. In full disclosure, the film is rated R, so the screening is meant to be a fun-filled, adult-oriented event. “Prepare to have a good time,” Douglas said. “And come with an open mind.”

The cost of admission, which includes a bag of “Rocky Horror” props, is $20. Tickets can be purchased at the door or online by clicking on the tickets button at www.brookhavenlittletheatre.com.

One driver injured in Hwy. 84 collision in Brookhaven

A two-vehicle collision on Hwy. 84 Wednesday resulted in one driver going to the hospital for treatment of her injuries.... read more