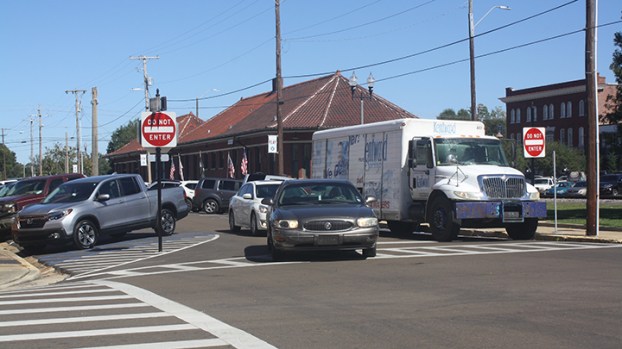 Photo by Adam Northam/A Kentwood water truck sits parked in the street on South Whitworth Avenue at the Cherokee Street crossing Wednesday as the driver makes deliveries to local businesses.

Brookhaven made the switch to one-way streets downtown five months ago and while motorists may be inconvenienced on occasion by delivery trucks blocking traffic, several merchants say the move by the city was a good one.

“It’s created a lot more parking spaces. I haven’t heard any complaints about it,” said Fitzsimmons.

The city made the final payment to the contractor earlier this month.

Besides the directional changes — with Whitworth running south and Railroad running north — the project also changed the two intersections on Cherokee Street to three-way stops instead of signals. During the project, the downtown streets were repaved and restriped so that parking spaces matched the new pattern. All parallel parking was changed to angled parking to create more space and an additional 36 parking spaces for the entire area.

Ryan Holmes, of Dungan Engineering, who was instrumental in bringing one-way streets downtown, said most of what he’s heard has been positive.

“I think there was an adjustment period at first, but I think people have finally figured it out,” Holmes said. “There are times where delivery trucks will be in the street. It’d be better if they could deliver earlier in the morning. If it becomes an in issue, I’m sure we can up with a solution.”

“When we have stuff delivered, we will ask them to get here before anyone starts coming in for work. If they are going to be later in the day, we ask them to come to the back parking lot behind the building,” he said.

For years, Janie’s Pastry on South Whitworth Avenue had issues with interchanging traffic on two-way streets.

The change to one-way streets has improved traffic flow, according to Stephanie Wallace, an employee at Janie’s.

“The street itself is real compact. When we had two-way streets, I believe it caused a longer delay because people had to wait on each other. Now you can just keep going,” said Wallace.

Wallace said deliveries are made in the back of the building to avoid any type of delays for traffic on South Whitworth.

Margaret Ann Britt, owner of Fashion Jewelry, said having a business located on a one-way street has its good points and bad.

“I believe it’s good and bad,” she said. “I drive a big truck and when I get ready to back out I have to really watch it because of the tighter space.”

Britt has not heard any complaints from customers because they’ve been blocked by delivery drivers.

Monticello Marketplace is a jubilee

It may still be October, but Monticello plans to ring in Christmas season early. Jingle Bell Jubilee is the theme... read more