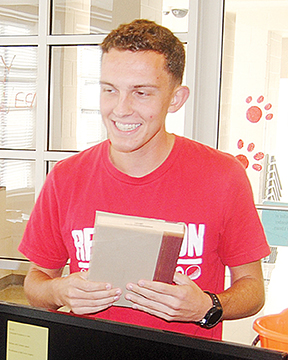 A Brookhaven High School student finished among the top 10 in the state in the Wendy’s High School Heisman program.

Senior Caleb McCreary ran across some information about previous winners of the program and it inspired him to apply. He won his school title and competed on the state level, making it into the top 10 of five males and five females.

Wendy’s High School Heisman is a joint program between Wendy’s and the Heisman Trophy Trust. It’s a scholarship competition for students who excel in athletics and academics. Male and female winners on the state level each win $1,000 scholarship as well as a silver medal and a Wendy’s state winner patch.

“I just want to be the best I can be,” said McCreary. “I’ve always just had that internal drive to make my family proud and make something of myself.”

Although McCreary didn’t win the state scholarship and won’t continue in the competition to the national level, he said the recognition will look good on his resume.

McCreary competes on the Panthers’ cross country and track teams. In past years, he kicked for the high school football team.

He currently has a 4.0 GPA and scored a 34 on his ACT. He received a National Merit letter of commendation for his scores on the PSAT.

With his high school career coming to a close in the spring, McCreary has big hopes for his future.

“I want to be a medical doctor. I specifically want to be a surgeon,” he said. “I’m taking college level biology and physics courses right now. Next semester, I’ll take chemistry and calculus.”

“I haven’t made my decision yet. I will probably make that decision over the holidays,” said McCreary. “I’m looking forward to focusing on one subject and diving into a major.”

Merchants in Brookhaven will soon be harking to hear the jingle bells of cash registers this Christmas season. Thirty members... read more