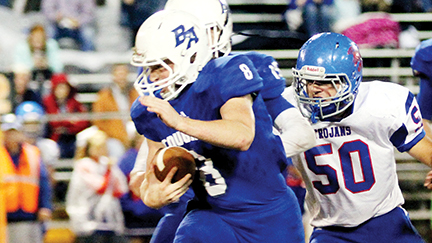 Even the utterly crummy weather that moved through the area on Friday night couldn’t dampen the excitement or pride of the Brookhaven Academy faithful as they watched their Cougars (9-2) take a 45-18 win over the Central Holmes Christian Trojans (6-5) in the first round of the MAIS AA State Playoffs.

The victory was the first postseason win since 2012 for a program that has captured three state titles on the gridiron. The cold wind and rain stunted the Cougar offense early on as BA only led 7-6 after the first quarter. The Trojans struck first with a 1-yard touchdown run by Wykece Johnson. That score was set up by a 65-yard pass from Nathan Taylor to Owen O’Bryant. BA responded with a 46-yard TD run by Tanner Waldrop. Waldrop, an early season transfer from Enterprise, would finish the game with three touchdowns.

Central Holmes regained the lead early in the second quarter on a 1-yard run by Taylor. A 52-yard run by Johnson moved the ball to inside the Cougar 10-yard line and after an unsuccessful 2-point attempt, Central Holmes led 12-7. BA took the lead back for good with 8:31 left in the second quarter when Logan Murray hit a wide-open Tate Felder on a 39-yard halfback pass. Cougar placekicker Corey Case hit the PAT kick to put his team ahead 14-12. Case, an eighth grader, finished the night 6-for-6 on PAT kicks and drilled a 28-yard field goal in the second half.

The next Cougar score, a 6-yard Waldrop run, was set up by big 4th-down conversion by Cougar quarterback Dawson Flowers. On 4th-and-4 from just outside the Trojan red zone, Flowers bobbled and dropped a shotgun snap and then dribbled the ball back up into his hands before weaving through defenders and diving for the 1st-down marker.

The Trojans would get their final score of the night on the following drive, which was set up by a 76-yard kickoff return by Johnson. The Trojans would convert with a 13-yard scoring pass from Taylor to Lake Melton that cut the Cougar lead to 21-18 with 2:16 until halftime.

The home team would perfectly execute their two-minute offense on the subsequent drive when Flowers hit Cade Brown with a 16-yard touchdown pass that came with only six seconds remaining in the half. The Case PAT kick would give the Cougars a 28-18 halftime advantage.

Waldrop would put the game away with a 49-yard touchdown run on the second play of the second half as the Cougars cruised from there on out. The BA defense scored a touchdown in the third quarter on a 35-yard interception return by Taylor Freeny. Cole Griffin and Justin Burt had a fumble recovery each for the Cougars.

Next up for Brookhaven is a quarterfinal matchup with the Centreville Tigers. Centreville has won seven straight over the Cougars dating back to 2011, including a 57-35 win in Centreville on October 29 of this year. BA last defeated Centreville on the road in 2009.

The challenge, a Tiger team that is seeded second in the playoffs, is one that Cougar head coach Ron Rushing looks forward to. “We’re excited to be one of the final eight AA schools still playing and we’ll go down there next week, roll the dice, and see what happens,” said Rushing.