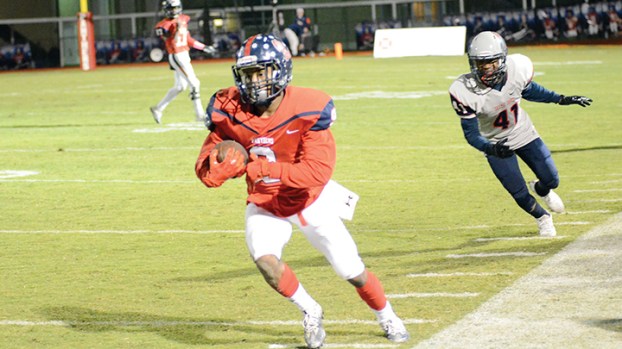 Photo by Adam Northam/Brookhaven junior Don Blandon (9) makes a carry during the Panthers’ 43-37 single-overtime win against South Jones on Friday night in the midst of rain and a hard-fought matchup.

The Brookhaven High Panthers survived a heart-attack effort from the Braves of South Jones Friday night, reaching down deep for just a little more juice and winning a high-powered offensive gunfight in overtime by a score of 43-37.

The Panthers made short work of their only overtime possession with a 25-yard touchdown pass into the end zone to finish a late-running game in which falling temperatures and torrents of rain caused sloppy conditions and sloppier football.

The lousy weather was responsible for a host of fumbles, drops, slips and slick footballs, but it struck the Braves hardest when they mishandled the snap on their overtime field goal attempt and handed the ball over to Brookhaven.

The overtime showdown was built on a game of huge plays from both teams. Panthers junior quarter back Sevante Quinn was deadly all night on the keeper, while South Jones junior quarterback John Mitchell exploited a mismatch in the Brookhaven secondary and went deep several times for tremendous gains all night.

Outside the big plays, both offenses seemed to peter out as the weather worsened and each defense slammed the door long drives with forced fumbled and third-down stops.

The win moves the seemingly unstoppable Panthers to 9-1 overall and undefeated against Region 3-5A opponents. South Jones falls to 7-4 on the season and is breaking even in regional play at 3-3.

Next week, the Panthers travel to Laurel to face the potent West Jones Mustangs, who blasted Wingfield Friday night to improve to 8-2 and undefeated in regional play. It will be the 11th and final game of the season and determine the post season paths both teams will take.

Even the utterly crummy weather that moved through the area on Friday night couldn’t dampen the excitement or pride of... read more