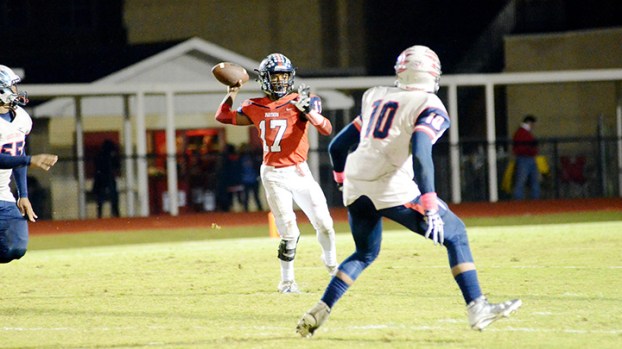 The game could have slipped away from Brookhaven.

Late in the third quarter of a largely defenseless exchange of touchdowns, the Panthers found themselves ahead by a single point and giving ground as South Jones moved in for a go-ahead score. The Braves had just completed a deep pass to Brookhaven’s 25-yard line to take command of the game’s momentum, and suddenly the home team was staring at the possibility of being behind in the bottom half of a contest where the bad guys’ offense seemed to score at will.

But on the next play, Brookhaven junior linebacker D.J. Durr leapt into the falling rain and stole a short pass from South Jones junior quarterback John Mitchell. The interception — Durr’s first of the season — preserved the Panther lead and gave them just enough steam to stay ahead of the Braves’ killer offense and later win the game 43-37 in overtime.

“Right when the ball was snapped, I saw the quarterback read his receiver and saw the slant coming toward me. I just did what I’m coached to do,” Durr said. “I got really excited. I knew it would change the game, but I didn’t know it would be that big of a play.”

It was a tremendous play by Durr, considering how easy it would have been for him to be asleep at the wheel at that point of the game. Both teams lived and died on big plays, and Brookhaven’s linebacking corps was forced to watch helplessly, in horror, as the Braves connected on deep passes that flew over their heads like eagles.

“It wasn’t nice, I’ll say that,” Durr said of the Braves’ deep passes. “But we knew what we were messing up and how to fix it. We knew if we wanted to win the game, we had to take it upon ourselves and get a turnover for our offense.”

The Panthers weren’t able to do anything with the free possession Durr generated — a dropped pass would lead to a punt — but they were able to score on their next drive and take the lead 37-29 with 8:59 remaining in the game. That proved to be just enough to hold off South Jones, who would force overtime but never gain the lead.

“D.J.’s interception was a big turning point in the game,” said Brookhaven head coach Tommy Clopton. “Any time you’re in a shootout, you definitely want to be the one pushing it. Sometimes you have to grind it out and sometimes it’s a homerun contest.”

There wasn’t much grinding. With a weather front moving into Mississippi and bringing wave after wave of cold rain, both teams were plagued by mistakes. The teams shared four fumbles, a pair of safeties and a ton of dropped passes and bad snaps in the first half alone.

The football was either striding forward to victory, or going nowhere at all. Panthers junior quarterback Sevanta Quinn completed only six of 16 passes on the night, but those six went for 216 yards, an average of 36 yards per completion. Junior running back Don Blandon and junior wideout John Hilbert were catching passes for an amazing 40 and 29 yards per catch, respectively, while most other attempts were dropped.

Edwards was hurt late in the third quarter and the medical staff had to yank him onto the examination table to keep him from running back onto the field. Clopton said the injury was just a deep bruise and Edwards will be fine.

“The weather was nasty, but both teams threw the ball. I don’t buy into the weather being an excuse,” Clopton said. “You still have to go out and play. I think both teams handled it well.”

Handled, and mishandled. Over and over again.

South Jones’s first play of the game was a flying snap for a big loss, and two plays later another bad snap had to be covered in the wrong end zone for a safety and Brookhaven’s first two points.

The Panthers lost yards on their ensuing possession and had to punt. With good field position, the Braves moved up to the Brookhaven 29-yard line before their quarterback, Mitchell, kept the ball and carefully picked his way to the stripe to put South Jones on top 7-2 with 7:47 remaining in the first quarter.

Brookhaven got the ball back, went the wrong way on a penalty and fumbled it away at midfield. South Jones took over and fumbled and slipped in the mud before punting it away. Two plays later Quinn was running free for a 57-yard score and the Panthers were up 9-7 with 3:59 remaining in the opening quarter.

Taking over, South Jones rushed four times and then threw it up for a long gain to set up a first-and-goal, but the Braves fumbled the wet ball away inside the Brookhaven 5-yard line. Perhaps it was the same slippery football that caused the Panthers to immediately fumble and give the Braves their own safety and tie the game at 9 at the end of the first quarter.

South Jones immediately unleashed Mitchell’s arm, and he connected with senior receiver Shiwon Lovett for a 71-yard touchdown and a 15-7 lead with 10:51 until halftime.

Brookhaven fumbled again and both teams traded punts before Mitchell and Lovett created fire in the rain for a second time, splitting double Panthers coverage for a 45-yard touchdown and a 22-16 lead with five minutes remaining in the half.

The thin home crowd got scared and quiet — quiet enough to hear Clopton holler his team into the end zone on a single-play drive, motivating Quinn to hit Blandon for a medium-length pass the running back turned into a 67-yard score, making moves and dumping defenders along the sideline to close up to South Jones 22-16 with 4:40 left in the half.

The teams punted out the rest of the first half.

Quinn and Blandon took the Panthers deep into Braves territory early in the third and Quinn rushed for a score to take the lead 23-22 with 10:08 remaining in the third quarter.

But once again South Jones called up Mitchell-to-Lovett for a 50-yard passing touchdown and the Braves answered immediately, going up 29-23 with 9:35 remaining in the quarter.

Clopton kept his Panthers on the ground on their next possession, turning in one of the game’s only sustained drives as Edwards rushed twice for big yardage and a third time for a short touchdown to put Brookhaven back on top 30-29 with 5:43 left in the third quarter.

Brookhaven senior defensive end Michael Stallings destroyed the Braves’ next possession, but Brookhaven was unable to capitalize and punted back. The next South Jones drive ended in Durr’s interception, giving the Panthers enough space to stop the Braves one more time and score on a 12-yard keeper by Quinn to increase the lead to 37-29 with 8:59 remaining in the game.

The Panthers had one more chance, but a 50-yard field goal was about 10 yards too long for senior kicker Tyler Mixon, and the game went to overtime. South Jones wasted their overtime possession with a bad snap on a field goal, while Quinn used his team’s possession for a rushing touchdown and a victory.

The Panthers (9-1, 6-0) travel to Laurel next week to take on the West Jones Mustangs (8-2, 6-0) in a Region 3-5A fight in the final game of the regular season. Brookhaven has secured home field advantage for the playoffs, and the West Jones game will determine which team is seeded No. 1 in the postseason.

The formula for telling time in sports

Let’s all just take a minute and breathe real deep. Lay down your axes. Douse the torches. Return the hounds... read more