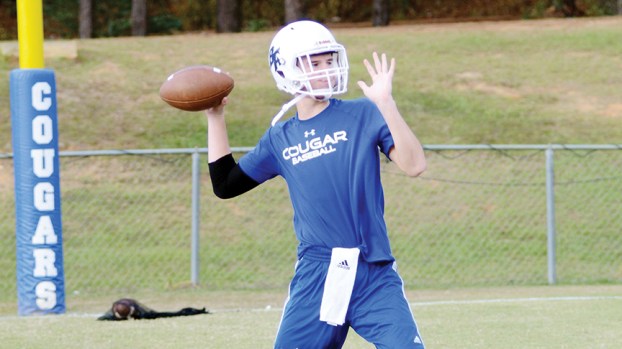 Brookhaven Academy is going on the road to fight its nemesis.

The Cougars (9-2, 2-1) travel to Centreville tonight to face the Centreville Academy Tigers (9-2, 2-0), a District 4-2A thorn in the cats’ side that boasts a long-tenured head coach and a powerful rushing attack that has ground down opponents all season — including BA, who faced them earlier in the season and lost 57-35.

Now, in the playoffs, revenge would go a long, long way toward healing September’s wounds, and the Cougars are ready for the rematch.

“My kids are excited to go over there and play this week. We know it’s going to be a challenge,” said BA head coach Ron Rushing.

There’s nothing complicated about the Tigers — they’re a 3,000-yard rushing team, rotating in six running backs with significant touches, all of whom are averaging enough yards per carry to get a first down every two plays.

Their weakness — if they have one — could be in the passing game. Centreville has completed only 36 passes on the season, and their leading receiver has only 10 catches. Rushing said play-action passing is a concern with the Tigers, but the Cougars cannot die like lambs before the Centreville rushing attack.

They’ll have to force the Tigers into the air.

“We may not get them behind the chains, but we have to put them in some situations where they have to throw the football,” Rushing said. “We’re going to play it three different ways and try to change up some looks, but we’re going to crowd the line of scrimmage.”

To do that, BA will have to control the middle of the field and force the Tigers out to the edges, where the Cougars’ speed can neutralize Centreville’s raw power.

Out there, Rushing will rely on sophomore linebacker Nick Ogden, who leads the team in tackles with 95. Senior linebacker Price King and junior linebacker Cole Griffin, with 51 and 55 tackles, respectively, will also have to hustle to the outside, and junior Justin Burt will be needed in run support from his position at defensive back. Senior defensive end Levi Smith — a 52-tackle man — will also be crucial in the plan to slow the Tigers.

The Cougars take on Centreville Academy at Centreville at 7 p.m. If they win, they will travel to either Manchester or St. Joe Greenville next week.

The Brookhaven Panthers have enjoyed fantastic production on the football field this season. The quarterback has scored 25 touchdowns in... read more