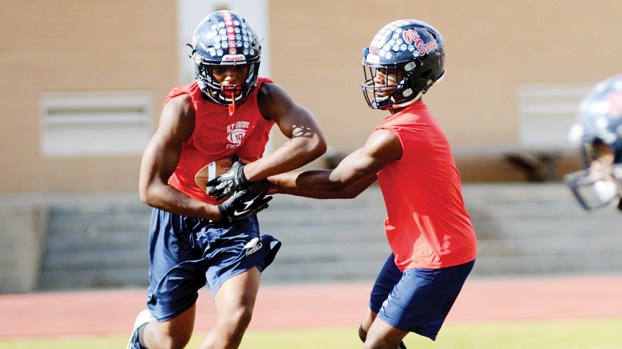 Photo by Adam Northam/Brookhaven senior running back Damarrell Leggett (left) takes a handoff from junior quarterback Sevante Quinn in practice Thursday afternoon. The Panthers travel to West Jones tonight for the final game of the regular season and the Region 3-5A championship before hosting a playoff game next week.

The Brookhaven Panthers have enjoyed fantastic production on the football field this season.

The quarterback has scored 25 touchdowns in the air and on the ground. Two running backs are above 1,000 yards rushing and have scored 29 times — 174 points — between them. The defense has logged 20 sacks and 12 interceptions.

These are the kind of individual statistics that no individual can achieve.

“All those numbers are the result of teammates doing their job,” said BHS head coach Tommy Clopton. “That’s the kind of niche for our team right now. There’s no superstar — we have 11 guys on the field who believe in each other, love each other and are playing hard for each other.”

It’s the kind of team chemistry any coach would love, and it’s the kind of jelling the big, battered family of Panthers will need if they’re to accomplish one of their main goals as the long season ends Friday night at West Jones — to win the Region 3-5A championship.

The Mustangs of West Jones (8-2, 6-0) are the last hurdle for BHS (9-1, 6-0), the last big game of the season before postseason play begins in Brookhaven next week. The two teams are evenly ranked — the fight is for first place in the region and top seeding in the playoffs. Both teams have had similar seasons, losing early in August and recovering quickly to leave an unbroken line of vanquished opponents behind them through September and October. Both teams even play the same style of football.

“It’s going to be an old-school, heavyweight fight. Whoever controls the line of scrimmage on offense and defense is going to have a chance to win,” Clopton said. “These are two very similar teams in terms of philosophy and coaching, and it’s going to be a very good game.”

The Mustangs have relied on their defense in 2017. They have some skilled players on offense — senior running back Austin Land is bearing down on 1,000 yards rushing this season, and senior receiver Garrick Randolph has averaged more than 17 yards per catch and scored four times. But the real work has been done without the ball in-hand.

The West Jones defense has sacked opposing quarterbacks 29 times, forced and recovered 12 fumbles and stolen 11 interceptions out of the air. Junior Byron Young, a 250-pound defensive end, has dragged down the quarterback 13 times by himself this season, and sophomore defensive back Antoine Kirk has intercept four passes.

“With West Jones, it starts with defense. They’re not going to line up wrong, they’re not going to bust an assignment, they will be clean,” Clopton said. “They’re a well-coached team. We can’t outnumber them or outmaneuver them, we’re going to have to outplay them.”

The Panthers’ tools for busting through the West Jones defense are no secret. Junior quarterback Sevante Quinn has passed for almost 1,200 yards, while sophomore Jaquarius Edwards and senior Damarrell Leggett have rushed for 1,104 and 1,030 yards, respectively.

But, as Clopton said, this won’t be a game for stars. Lesser-known Panthers have stepped up lately, and the coach is looking to those workers to continue their contributions from behind the curtain.

Senior Dedric Smith and junior Coker Wright have been paving the way for Brookhaven’s team rushing total of 2,643 rushing yards. The offensive linemen have combined for 45 pancake blocks between them. Junior receiver John Hilbert has quietly turned in a great year as well, catching passes for 408 yards and eight touchdowns. He came up big in a close win against South Jones last week.

Senior defensive end Michael Stallings has had his name called out over the loudspeaker lately as well. He’s made 27 tackles and brought down opposing quarterbacks twice this season. Sophomore Byrion Robinson has 58 tackles and a pair of interceptions on the year.

“Sometimes it’s hard to single out any one guy,” Clopton said. “We’ve had a lot of guys who’ve been extremely solid for us.”

Brookhaven has already secured a home playoff game next week. Defeating West Jones would make the Panthers the No. 1 seed and increase the chances for more home games further into the post season, though the games won’t get any easier — the difference between the No. 3 and No. 4 seeded opponents won’t be much, Clopton said. The Panthers’ first round opponent will be Stone County, Wayne County or Long Beach, depending on who beats whom and by how much in a tricky game of mathematics.

Clopton isn’t really worried about all that. His sole focus is West Jones and the Region 3-5A crown.

“One of the things we preach to our kids is that championships don’t come along every day in your life, so when you get an opportunity to be called ‘champion,’ you better seize the day,” he said.

Brookhaven will face West Jones at the Mustangs’ house in Laurel at 7 p.m. tonight.

Bogue Chitto heads to Taylorsville for Round 1 — Bobcats must stop 3,000-yard passing game to advance

The Bogue Chitto Bobcats are headed to Taylorsville tonight, where one of the best teams in the state awaits in... read more