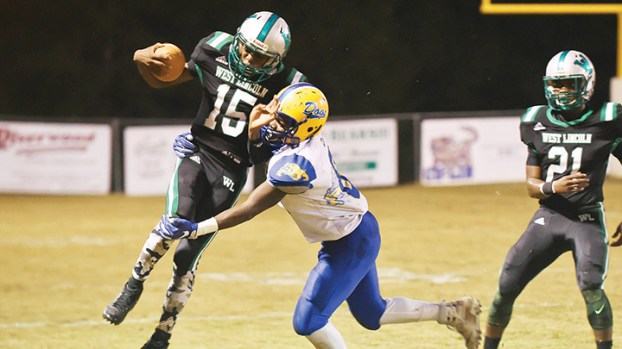 Photo by Teresa Allred/West LIncoln’s senior corner back Nathan Smith (15) takes a hit as he makes a carry in Friday night’s game. The Bears fell in their playoff face-off against Bay Springs, 54-20.

The Bulldogs (6-5, 2-2) got the ball going with a 7-yard touchdown just three minutes into the game to lead 6-0. The Bears fumbled the kickoff and Bay Springs had the ball back quicker than expected, at the 22-yard line.

The Bulldogs took the ball into the end zone on a 4-yard rushing touchdown and followed it up with a successful two-point conversion to lead 14-0.

Very quickly thereafter, the Bay Springs defense intercepted a West Lincoln pass to carry the ball eight yards for another touchdown. The kick was good, and the Bulldogs had a solid 21-0 lead.

Before the clock ran out on the first, Bay Springs had upped the total to 28 on a three-yard run and a good point after.

West Lincoln finally got on the scoreboard as the second quarter started with a trick play from Gabe Nations. A 70-yard run put six points on the board and a successful two-point conversion narrowed the field to 28-8.

But Bay Springs was not settled with the score and just a couple of plays later ran their own 65-yard path to the end zone and tacked on a good kick to lead 35-8.

On the heels of that score, Bay Springs intercepted once again and ran the ball for a touchdown with no extra point. The Bulldogs led 41-8.

West Lincoln’s Matthew Case passed to Le’Darrius Jones, who went 18 yards for a touchdown. The Bears went into halftime trailing 41-14.

Halfway through the third quarter, Bay Springs scored on a 40-yard rushing touchdown, tacking on the extra point to lead 48-14. With barely a minute left in the quarter, a 10-yard run gained another six for the Bulldogs to put them at 54 to the Bears’ 14.

Bears sophomore Keshon Byrd made the only West Lincoln interception of the night with just under three minutes left on the game clock. The Bears were set on the 10-yard line.

A 10-yard run put the green jerseys in the endzone for the third time. The extra point attempt was unsuccessful, and West Lincoln ended the night — and their 2017 game play — with a 54-20 loss.==

Loyd Star goes down with grit, 34-14 in Heidelberg

The Heidelberg Oilers blew open what was a two-score game at halftime to cruise to a 34-14 win over the... read more