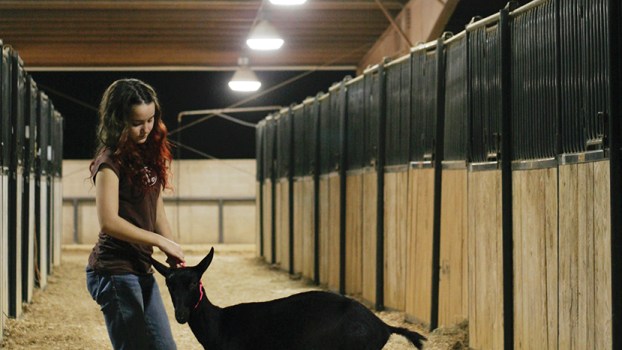 Photo by Adam Northam/Copiah County’s Emily Daigle, 12, leads her show goat, Gardenia, toward the pens at the Lincoln Civic Center’s stall barn for a training session Monday night, hosted by Lincoln County 4H. The local 4H and a long list of other groups who frequently use the center’s stall barn and arena could soon benefit from installation of LED lighting throughout the facility.

Let there be light — LED light.

Operators at the Lincoln Civic Center are piling up cash from a few different pots to install LED lighting throughout the facility, bringing outdoor areas up to par with the brightly lit interior of the multi-purpose building, which was upgraded years ago. County supervisors on Monday passed a resolution requesting funding for the project from Entergy Solutions, which is working with the center’s commission to provide money through an energy efficiency program.

“Once we get these LED lights installed, it will be a lot crisper and a lot brighter lighting, all the while saving on our power bill each month,” said Civic Center Director Quinn Jordan. “We’re going to look better and save money. It’s kind of a win-win.”

Jordan told supervisors the preliminary cost estimate for the project is around $65,000. The civic center will put up $40,000 remaining from last year’s state bond money and $5,000 from its annual operating budget, with hopes to secure the remaining $20,000 from Entergy.

Once installed, the Energy Star-rated LED lights are expected to save the civic center more than $7,000 annually in electricity costs.

The resolution passed by supervisors Monday is part of a multi-step application process required for the power company’s program. Though the money has not been officially pledged to Lincoln County, it appears to be as close to a sure thing as a government can get.

“We go through a process of preapproval, so as long they go by all of the rules and do what the preapproval requires, we’ll go forward with providing the incentive,” said Angelica Rawls, project coordinator for energy efficiency with Energy Industry Consulting and Solutions.

Entergy makes the money available through Entergy Solutions, a program started to comply with a 2013 order from the Mississippi Public Service Commission requiring power companies to offer consumers options for energy efficiency.

The project would see the retrofitting of existing light fixtures with light emitting diodes in the arena, stall barn and in the smaller rooms inside the multi-purpose building not already upgraded.

Plans are to move along swiftly — the lighting is already installed, so retrofitting will be less intensive than new installation. Entergy’s program also requires appropriated funds to be spent within nine months, so the civic center commission plans to get started as soon as the funding is awarded, hopefully early in January.

Jordan also discussed what he calls the “red iron” painting project with supervisors, a larger, more expensive undertaking to repaint the arena and stall barn. Red iron may cost around $135,000 — it will take a lot of paint to coat more than 37,000 square feet — and isn’t scheduled until sometime in 2018.

“The building has been out in the air for 20 years and it’s rusting, paint is coming off. But it’s a lot cheaper to maintain than to rebuild,” Jordan said. “These buildings were a huge project when they were built, and we don’t take that lightly. We want to take care of that investment.”

Copiah-Lincoln Community College has been selected by the Aspen Institute as one of the top 150 community colleges in the... read more