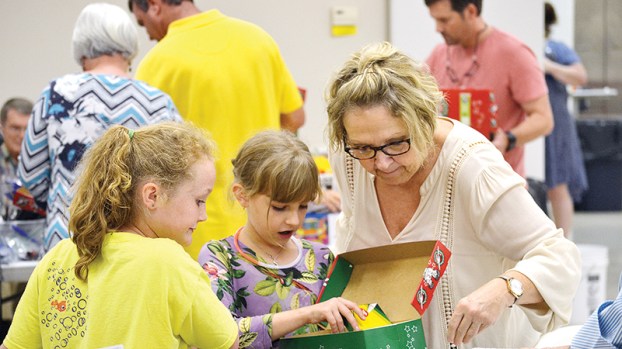 Thousands of gift-filled red and green shoeboxes will leave Lincoln County soon on an important mission — to spread the good news of Jesus Christ.

Operation Christmas Child is a project of Samaritan’s Purse, an international Christian relief and evangelism organization headed by Franklin Graham. Its mission is to demonstrate God’s love in a tangible way to children in need around the world. Since 1993, Operation Christmas Child has collected and delivered more than 146 million gift-filled shoeboxes to children in more than 150 countries and territories.

Churches throughout Lincoln County and surrounding areas are hosting packing parties to fill shoeboxes with toys, school supplies and hygiene items. Those churches will bring their boxes to First Baptist Church of Brookhaven, which is the county collection site.

Walmart picks up the boxes from FBC and takes them to Southwest Community College in Summit. From there the boxes from Southwest Mississippi will head to Atlanta, Georgia, where volunteers from around the country will check each box to remove items that aren’t allowed like toothpaste and candy. Items removed go to other charitable organizations for use, Hodges said.

The relay site at FBC shipped 3,632 shoeboxes in 2016, Hodges said. She expects more this season.

It’s not too late to pack a shoebox, she said. Besides churches, Hodges encourages schools, organizations, businesses and individuals to pack boxes. Any kind of shoebox can be used — plastic or cardboard. The boxes will be delivered to girls and boys age 2 to 14. Boxes should be marked with the sex and age of the intended recipient. A $9 donation for shipping is requested and the money can be placed in the box. Volunteers at the relay center don’t touch the money. It’s taken out when the boxes get to Atlanta, Hodges said.

This will be the 12th year that Hodges and some of the other volunteers will be traveling to Atlanta to help in the distribution warehouse. She’s involved in the project because it’s a way to be a missionary in other countries without leaving home.

While the boxes are stuffed with fun toys and useful items, a message about Jesus is also included in each box, printed in the child’s language.