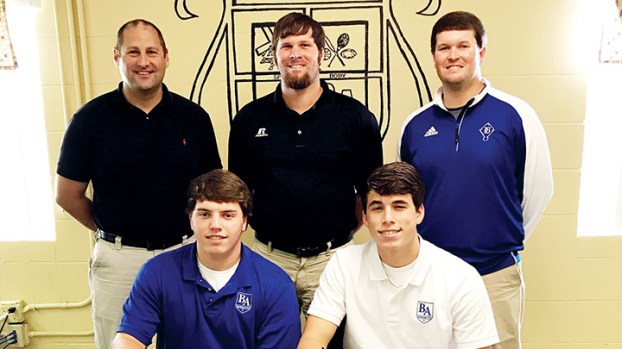 Two Lincoln County baseball players have signed their names to a future on the diamond.

Brookhaven Academy seniors Cade Hodges and Tucker Watts are going to the next level on baseball scholarships after signing their rides in a small ceremony at BA recently. The pitcher-catcher duo has been together since childhood, but after this season with the Cougars they’ll go their separate ways — Hodges to Pearl River Community College and Watts to Southwest Mississippi Community College.

“I’m not used to losing, and the main goal at Pearl River is to win. That’s something I want to be a part of,” Hodges said. “They play together and they want to win just as bad as I do.”

Hodges said he was drawn to PRCC by his relationship with the coaching staff. He’s excited to get enrolled at Pearl River and hit the weight room to begin getting into next-level baseball shape, he said.

His mother, Sherri Hodges, said her son has worked hard for a spot on a college baseball team his whole life. She’s not worried about the distance to PRCC, either.

“Nowhere is too far for us to watch him play baseball,” she said.

Watts won’t have as far to drive when he begins his collegiate career. He’s been working on a baseball career his whole life, too, and now he’ll have the chance to play catcher at Southwest.

“If I work hard enough, if I tweak some things and work on my footwork, I can be the starting catcher there,” Watts said. “I’ve worked with the assistant coach and he’s helped me get a lot better.”

Watts’ father, Jason Watts, said he was proud to see his boy secure a place at Southwest.

“I’m glad all his hard work has finally paid off,” he said.

Watts’ and Hodges’ hard work has taken place across two schools, public and private — both are former members of the once-champion Loyd Star baseball team, and both enrolled at BA after some players were declared ineligible to play for the Hornets, or attend the school, due to residency requirements.

But there are no hard feelings for the two players, and coaches from Loyd Star attended the scholarship signing ceremony at BA.

“I was fortunate enough to coach Cade and Tucker from ninth grade to 11th grade and I appreciate all the hard work and effort they put into our program,” said Loyd Star baseball coach Jared Britt. “I look forward to seeing how well they perform this year at BA, and I look forward to watching them play at the next level. I know they’ll make big contributions to both programs.”

Hodges and Watts haven’t played a second of baseball for BA coach Tyler Parvin yet, but he’s already proud to call them his players.

“It’s always a great accomplishment when you get to continue your dream of playing baseball at the next level,” he said. “We are extremely happy to have them here and they’re going to play a big part in our season.”

Both played big parts in the Loyd Star season earlier this year.

Hodges finished the season with a .365 batting average, scoring 50 runs and batting in 38 scores. His on-base percentage was .466. As a pitcher, he threw six shutouts, three saves and one no-hitter.

Watts finished last year with a huge .480 batting average, scoring 21 runs and batting in 45 scores. He also served as the team’s catcher.