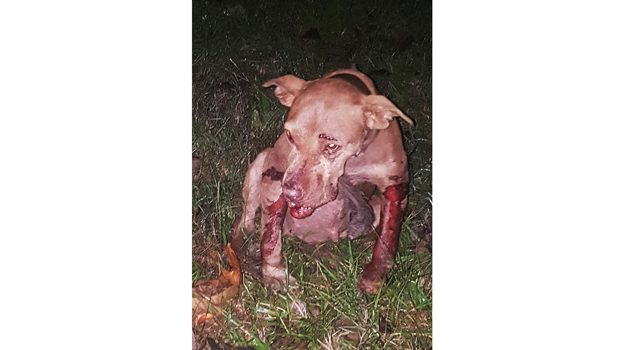 Dozens of dogs, many injured or dead, were discovered in a suspected dog-fighting farm in Adams County Monday evening.

NATCHEZ — Adams County Sheriff’s Office deputies discovered a suspected dog-fighting farm in the Cranfield community Monday night in what they described as likely the largest animal abuse case in the county’s history.

“You probably have about two acres, with nothing but pit bulls,” Sheriff Travis Patten said. “We have dogs, some their legs have been bit off, one with its lower jaw missing.

“You have a bone yard out here in plain view. They didn’t have the decency to bury the dogs,” he said.

“It’s obvious what’s been going on out here,” Patten said. “People like this, they’re obviously going to be brought to justice.”

Sheriff’s deputies received a call at approximately 7:19 p.m. of suspected dog fighting and were dispatched to 29 1/2 Miracle Road in the Cranfield community in eastern Adams County.

“When deputies arrived, they were unable to find anyone at the location,” Patten said late Monday. “But they could clearly see wounded animals, some that need to be euthanized (due to the extent of their injuries).

“No less than 35 dogs have been discovered, some in very poor condition, some chained throughout the woods,” Patten said.

The amount of injured dogs was taxing on the county’s resources, Patten said.

“This was just way more than what we could handle here, period,” he said.

After calling the Natchez-Adams Humane Society, deputies eventually reached out to an organization in the Wiggins area that was coming to help assess and care for the animals.

The property’s owner is listed as Tommie Queen, who sheriff’s deputies are seeking to locate for questioning, though they said they do not know if he is responsible for the dogs or not. Anyone with knowledge of Queen’s whereabouts is asked to contact the sheriff’s office by dialing 911.

Deputies late Monday were roping off the area and planned to continue the investigation into the night and early morning hours, Patten said.

“We’ll be running a search warrant on this location in the morning as well as recovering the animals,” he said.

Patten said investigators believe more than one person was likely responsible, given the scope and scale of the number of animals.

“Believe me, we will seek out each and every person that could remotely be involved in this, and we will prosecute them fully,” Patten said.

The sheriff said as day breaks and investigators can better search the property after they obtain a search warrant, he fears they may find more animals — alive or dead.

“There is no telling what we’re going to find when we go deeper into the woods and into the house.”

Church should be a safe haven in a sinful world and a place that’s open to all, said Lincoln County... read more