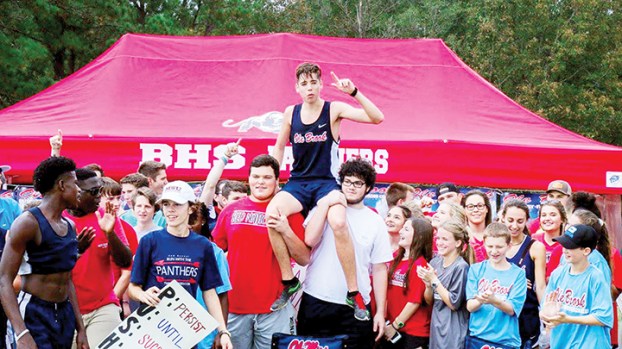 Photo submitted/Brookhaven High senior Andrew Knott is hoisted on the shoulders of fellow students Trace Clopton (left) and Gayton Johnson after he became the individual 5A cross-country state champion Monday at state finals.

Like a fighting hero exiting the arena, they bore him up on their shoulders.

Brookhaven High School senior Andrew Knott was hoisted up, red and sweating, at the end of the cross-country state finals Monday after he crossed the finish line first to become the fastest man in 5A — and a state champion. The star Panther runner finished the 5K race in 16 minutes, 43 seconds to claim the title, and his teammates crossed over right behind him to earn the team championship for Brookhaven.

“I was just trying to do my part on the team and put us in the best possible position to pull out the win,” said Knott, a verbal commit to the cross-country team at William Carey University. “This group of guys has been working hard for the past few years to achieve this. I’m glad everything finally came together.”

Knott said Lockwood was leading him by 10 seconds after the first mile, but the two were even in the next quarter-mile. By the half-mile mark, Knott had overtaken Lockwood and jumped ahead by 15 seconds.

The rest of the Panthers turned in stellar performances as well. All seven Panther runners finished in the top 15 percent of the race, which featured 162 total competitors from around the state. The great individual performances by the Brookhaven runners allowed them to edge out arch-rival Saltillo, with whom they’ve traded points and placement since last season, to take the state championship as a team.

Behind the Brookhaven men came 138 other runners.

Knott won the trophy after a season of triumph in which he’s been ranked either the first- or second-place runner statewide, regardless of classification. His father, assistant cross-country coach Shannon Knott, said Andrew has been logging around 50 miles per week since spring to prepare himself for the championship run.

“He’s a hard worker, a straight-A student, an Eagle Scout, a great kid,” he said. “I’m lucky to be his father.”

The BHS girls team also turned in a slick performance, finishing in second place among 17 5A teams.

Behind them came 75 other runners.

“It was a great day for Ole Brook cross-country,” said head coach Kevin Bower. “The support for our team from the school and the community was overwhelming.”

The West Lincoln varsity girls built a green wall around the lane and kept Wesson from getting clean approaches to... read more