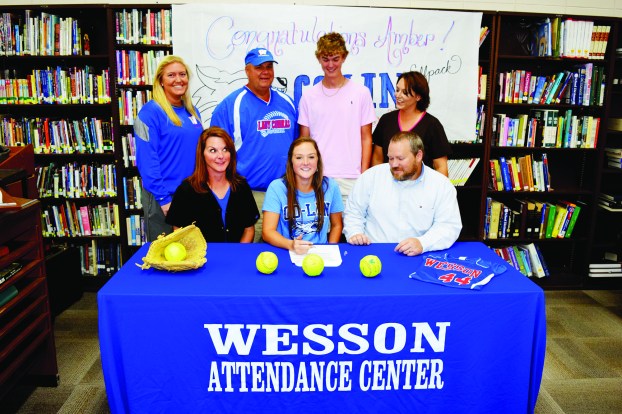 A high school student from Wesson has earned herself a little cash for college because she plays a mean game of softball.

Wesson Attendance Center senior Amber Brinson has signed a softball scholarship with Copiah-Lincoln Community College and will swing aluminum for the Lady Wolves next season. She made her mark on the acceptance letter Wednesday in a small reception at WAC.

“I’m really excited about playing softball for Co-Lin. I think it’s going to be a really good opportunity for me,” Brinson said.

Brinson played a pivotal role in the Lady Cobras’ run into the fast-pitch playoffs earlier this year and the team’s deep advance into the slow-pitch post season last month. She had a big bat in slow-pitch, averaging .566 and blasting nine homeruns to lead the team. In fast-pitch, she pitches and fields.

Now she’ll take her swing down the street to Co-Lin, where she plans to study pre-physical therapy and, later, move up to Mississippi State for a kinesiology degree.

But first, the game continues.

“As soon as I visited campus, it felt like home,” Brinson said of Co-Lin. “I know most of the players and they will all make really great teammates.”

Wesson softball coach Michelle Nunnery said Brinson was a hard worker, a team leader and someone who will be very difficult to replace on the roster. But with one season of fast-pitch still to go before graduation, she’ll suit Brinson up one more time.

“I told her we’re not doing any ugly crying until fast-pitch is over. No sadness yet,” Nunnery said.

Brinson’s mother, Robin, is the school nurse at the Mississippi School of the Arts. She remembers when her daughter played T-ball and the kids would play leapfrog in the outfield.

“We are proud of her for using all her talent, working hard and giving 110 percent,” she said.

John Brinson, Amber’s father, has coached her and her friends up through T-ball and little league through the years.

“I’m very proud of the woman our young lady has become,” he said. “She has a great focus, not just in athletics, but in academics, too. She always wants to achieve the most she can.”

“We are very happy to have her join the Wolfpack,” he said. “She will certainly be an asset to our team.”