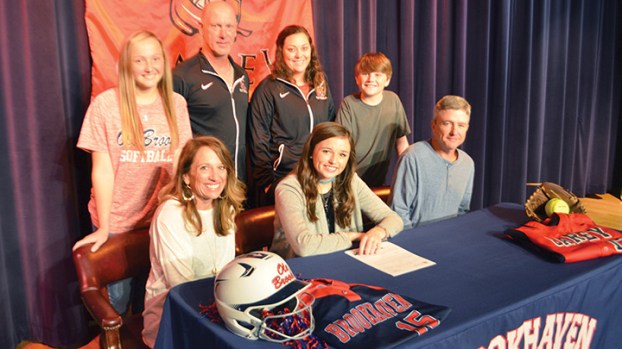 She’s traveled around playing softball all her life, but next year she’ll finally get somewhere and stay put.

New Brookhaven High School student Haley Nations is bound for William Carey University on a softball scholarship in 2018 after signing an agreement Thursday in a ceremony at the high school. The left-hander has been a varsity-level pitcher since seventh grade, and has played for multiple travel and summer leagues, Enterprise Attendance Center and will start for Ole Brook next spring before she becomes a college girl.

“I felt like William Carey is where God wanted me to go. I love the environment — it’s a great school and a great fit for me,” said Nations, who had offers from Southern Miss and Jones Community College. “I feel like I’m needed at pitcher and I should fit in well.”

William Carey head coach Craig Fletcher, who came to Nations’ signing, said a left-handed pitcher with her skills is a rare thing at the next level. He said plans are for her to start on the mound as a freshman.

“We’re going to throw her to the lions,” Fletcher said. “She’s come to our camps and has been committed to us a long time. We’re glad this day is finally here.”

Fletcher said his staff has pursued Nations because of her grit, competitiveness and faith. She’s active at Fair River Baptist Church.

Nations’ father, Joel Nations, said his daughter has worked hard, with a lot of great coaches, over the years.

“I spent a lot of time on bucket, catching balls,” he said.

Brookhaven softball coach Mandy Vinson hasn’t fit Nations into a Panther jersey yet — that will come in the spring. But she’s coached her new player before in tournaments around the state.

“She has a good presence on the mound, and she’s going to be a really valuable asset to our team this year,” Vinson said. “She’s a good leader on and off the field.”

Nations plans to major in physical therapy. Her little sister, Lynsey, is a sophomore at BHS and softball teammate, and her little brother, Paul, is also coming up in the school district.