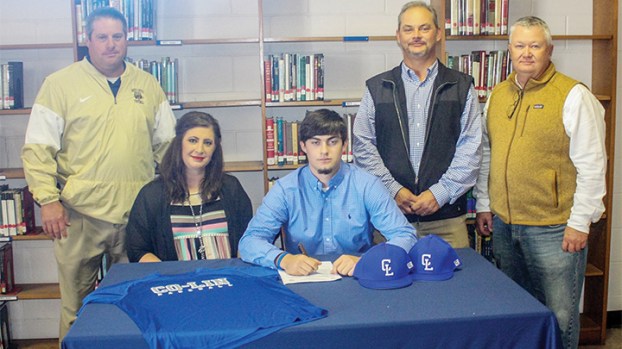 He likes to hit, and he doesn’t even want to advance to first base unless he gets there off his bat.

Next season he’ll take a walk if the coaches at Copiah-Lincoln Community College tell him to — no matter how bad he wants to swing — because that’s where he’ll be attending school on a baseball scholarship. Lambert signed with the Wolves Monday in a small ceremony at Bogue Chitto, with plans to hit and field for Co-Lin in 2018.

“I’m ready to get up there. Hopefully, I can go up there and do some good,” Lambert said. “I can be a good outfielder and cover a lot of ground, and I want to be a big stick for the team, get some runs in.”

Lambert had a great batting average during Bogue Chitto’s season earlier this year, going .545 and smacking 12 doubles and a trio of homers. He’s also a big guy, and Co-Lin baseball coach Clay Smith likes having a physical athlete on his team.

“That’s a real benefit for us in junior college,” Smith said. “He’s already developed physically, so we just have to get him up to the speed of the game playing college baseball. I don’t think he’ll have a problem doing that with his work ethic.”

Before Lambert gets up to speed at Co-Lin, he has unfinished business at Bogue Chitto.

He will start at centerfield for the Bobcats this season and will take a few shots at home plate from the mound as well. Coach Gareth Sartin previously coached Lambert in football before a concussion cut his career short, and he’s looking forward to coaching the senior again in the springtime as he takes over the baseball team.

“He has a lot of pop in his bat,” Sartin said of Lambert. “He’s a good line drive hitter, and his speed helps him take the singles and the doubles. He’s a player who puts a lot of pressure on the defense.”

“He’s been a joy to coach, and I’m looking forward to riding over to Co-Lin to watch him play,” he said.

Lambert’s mother, Clancey Langley, said her son is the most competitive kid she knows. She recalled a time at the plate when he swung so hard he lost the bat, which flew out into the road beside the field.

“He always swings for the fences, but that time the bat was going for the fence,” she said. “He’s a hoot to be around, and very competitive.”

Lambert’s father, Ron Lambert, said he was glad that his son’s don’t-lose attitude earned him a scholarship.

“I’ve coached him since he was a little-bitty thing, and I’m very proud of him,” he said.

Treat yourself to a new deer rifle

It’s time to buy a new deer rifle. Yeah, I know — ‘Ole Bessie belonged to your grandfather and you... read more