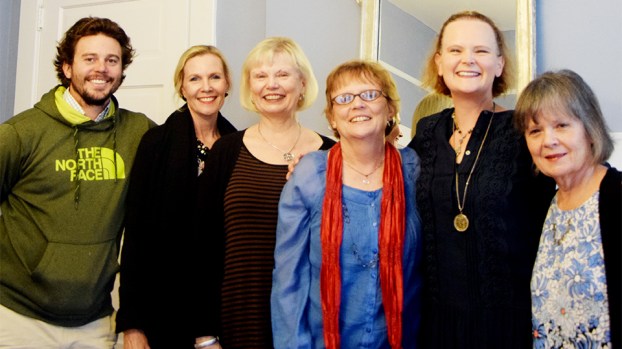 The Becker and McGrath families were honored recently for their contributions to the restoration of historic buildings on the campus of the Mississippi School of the Arts.

The historic archival room located in Elizabeth Cottage was named in honor of the two families, who were both early residents of the city. A dedication and reception took place at the Becker-McGrath Family Room  earlier this month.

The Becker family moved to Brookhaven from New Orleans in 1867 and married into the McGrath family, who came to the area in 1858. J.W. McGrath — in statue form — sits permanently in Railroad Park between the tracks and Janie’s Pastry. McGrath was a beloved and respected Brookhavenite until his death in 1922.

The effort to name the room after these two prominent families was spearheaded by Bettie Cox, who served as the first librarian of MSA from 2003 until her retirement in 2007.

The event was well-attended by members of the family and community, who enjoyed the historical displays of artifacts collected from members of the community, said Jennifer Jackson, coordinator of school advancement at MSA. These included bovine bones and coal pre-dating the Civil War, a book from the personal library of Harvey Johnson, who was president of Whitworth College in the late 1800s, and various memorabilia from Whitworth alumni.

Members of Johnson’s immediate family — descendants of the Becker-McGrath family — were also in attendance.

“The room also contains memorabilia and the history of MSA, much of which was lovingly chronicled by Mrs. Roberta Barnett and her late husband, Dr. Jim Barnett, who was so instrumental in the creation of The Mississippi School of the Arts,” Jackson said.

Other items include signed manuscripts donated to MSA by celebrated authors such as Beth Henley and Richard Wright.

The Lincoln County School Board doesn’t know how its trustee election schedule got out of whack, but it’s trying to... read more