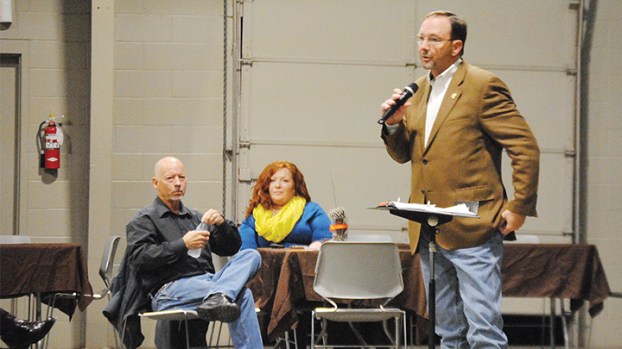 A town hall meeting, held Tuesday night at the Lincoln Civic Center, highlighted a simmering local crisis. Opioid-related deaths and crimes have escalated in the past five years, and state officials are sparking awareness in rural areas.

The project is a coordinated effort by the Governor’s Opioid Task Force, the Mississippi Bureau of Narcotics, the State Pharmacy Board, the Federal Bureau of Investigations and the Mississippi Department of Mental Health.

The problem has gotten so severe locally that — according to MBN Director John Dowdy — 40,732 opioid prescriptions were written in Lincoln County last year. Bear in mind that the county’s population tops out at 34,523. Statistics also indicate a similar imbalance in Copiah and Lawrence counties.

Mallette said the greatest challenge in combating Mississippi’s opioid epidemic is getting communities like Brookhaven to acknowledge the problem.

“People are dying, and, until we stop shaming them and start talking to them, they’re going to continue to die,” she said.

Mallette helps organize the statewide drug awareness initiative responsible for Tuesday’s town hall in Lincoln County. Mallette is traveling all over the state to spread the message that Mississippi ranks fifth nationally in the number of opioid-related deaths per capita.

Locally, Lincoln County Sheriff Steve Rushing has noticed a steady up-tick over the past few years in crime associated with prescription drug abuse.

“We’ve seen a pretty good increase of pills being sold on the streets,” he said. “And we’ve already had a couple of cases of heroine.”

As sheriff’s deputies encounter more crime linked to opioids, local courts have had to adjust.

The 14th Circuit Court District’s drug court is responsible for analyzing addiction-related cases, and they have recently instituted an area-wide rehabilitation program.

“If a crime has a connection to an addiction, then we come in and look at that individual and do an exhaustive screening on them,” Drug Court Coordinator John Douglas said.

The program is designed to help rehabilitate addicts rather than shunt them into the county jail.

“What (Circuit) Judge Michael Taylor and John Douglas are doing with the drug court in Brookhaven is amazing,” Mallette said.

The drug court is concerned with nipping opioid-related crime at its source, and, according to Douglas, the main part of dealing with the prescription drug crisis means holding people accountable.

There are currently 232 people participating in the court’s initiative. The process of finishing the program can last anywhere from three to five years, and, after completion, participants are sometimes able to have their records expunged. But, according to Douglas, that is determined on a case-by-case basis.

Rushing believes members of the community are also responsible for helping stem the opioid crisis’s rising tide. He said people should take the time to responsibly dispose of their old medicine and keep their current prescriptions well hidden.

“We have seen it in some of our burglary cases,” he said. “We’ve had cases where they just steal medicine.”

Old prescriptions can be safely discarded at the drop box in the lobby of the Mississippi Highway Patrol’s substation on Hwy. 84.

“When you walk into the lobby, the drop box is sitting there,” Rushing said. “It looks like a mailbox.”

Opioid addiction affects a broad spectrum of Mississippians, and Mallette hopes that — as the stigma around rehabilitation slowly dissipates — more people will seek treatment.

“If you, a loved one or anyone you know is struggling with addiction, call us,” she said. “We have resources, and there are people around the State of Mississippi who want to give you help.”