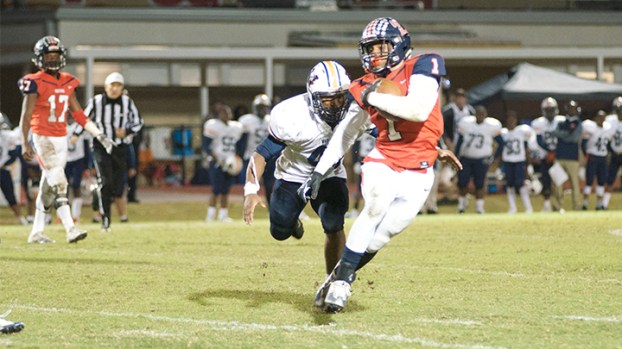 Photo by Adam Northam/Brookhaven senior running back Damarrell Leggett (1) eludes a defender during this past Friday’s 39-33 win over Wayne County at home in the first round of playoffs.

Brookhaven Panthers off to Laurel for Round 2 of playoffs

It’s almost like there are two Brookhavens out there.

One of them is the throat-cutter squad of Panthers who disassembled the mighty Mustangs of West Jones and shut them out in the regular season’s final game. The same group allowed Forest Hill only six points and North Pike a dozen. The other Ole Brook team let the South Jones Braves pass for 350 yards and come within a touchdown of victory, then allowed itself to be run through and over by a Wayne County team that had a chance to pull off the upset before their two-minute drill came undone.

For Panthers head coach Tommy Clopton, either of those teams will be up to the task tonight in the second round of the 5A playoffs, when Ole Brook (11-1, 7-0) puts the season at risk against the Golden Tornadoes of Laurel (8-4, 5-2). No matter which group of Panthers gets off the bus in Laurel, all he needs them to do is something they’ve done consistently all season.

He needs them to win.

“This time of year, it’s not about style points. It’s just about winning,” Clopton said.

The Panthers will need substance, not style, if they are to defeat Laurel for the second time this season.

Ole Brook walked away from the two teams’ regular season game Sept. 29 with a 42-35 win and has won every game since — Laurel lost one more after that, but only one, and last week they upset Picayune in the first round of the playoffs to earn the right to host Brookhaven.

The gold twisters are better than the national average in every category. Their offense has amassed 4,300 total yards. Junior quarterback Sinclair Ulmer has thrown for 1,238 yards and 10 touchdowns, and junior running back Zias Perryman leads all rushers with 1,071 yards and 19 touchdowns. Perryman scoots along at 6.8 yards per carry, and Laurel has four other backs behind him with at least 200 yards on the season, so they can rest him when they need to.

Laurel runs up its numbers in a spread attack that features the run but isn’t afraid to go deep, Clopton said.

“They like to put those athletes in space and throw down field,” he said. “They’re going to score — we know they can move the ball and score points in a hurry. We have to eliminate the big plays and make them earn everything they get.”

On defense, Laurel features a senior middle linebacker who has twice as many tackles as his nearest teammate — Jaylen Smith has taken down opposing runners 104 times this season. Senior defensive lineman Nigel Nixon has recorded seven sacks, and three members of the Tornadoes’ backfield have three or more interceptions each.

To break through Laurel’s defense, Clopton and the Panthers will do what they always do — lean hard on senior running back Damarrell Leggett to collect and distribute bruises while leaving junior quarterback Sevante Quinn in space to make plays with his feet or his arm.

Last week Leggett rushed for more than 200 yards on more than 20 carries with no one else to back him up, but this week Clopton hopes to bring back 1,000-yard sophomore rusher J.Q. Edwards, who has missed the previous two weeks with a knee injury sustained against South Jones.

“It will be a game time decision, but bringing J.Q. back is our plan,” Clopton said. “Duke (Leggett) had a great game last week, no question. That was a testament to him and our offensive line’s ability to create some plays.”

In Brookhaven’s previous game against Laurel, the Panthers did just that. The stats from the game in September are typical 2017 Ole Brook — the bulk of the win was earned on the ground, with 308 rushing yards and three touchdowns, while the quarterback was turned loose just enough to catch the opposing defense off-guard. Quinn passed for 140 yards and three touchdowns six weeks ago.

If the Panthers can recreate that performance, they will be in good shape to sweep Laurel out of the season.

“Our guys won’t get too high or too low. They understand what is at stake,” Clopton said. “I think you’ll see us play with a much higher motor Friday night.”