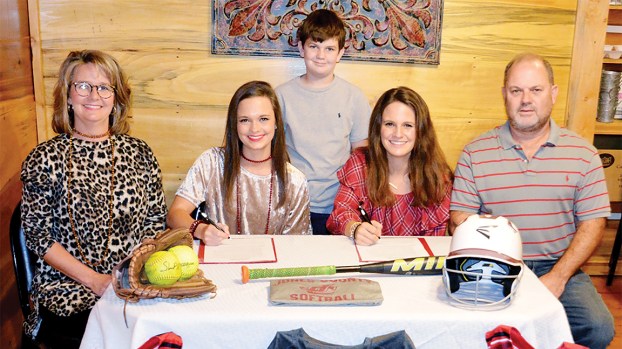 Jones County Junior College is getting a pair of strong local softball players to join its team next season, though it remains unclear if coaches there will be able to tell the girls apart.

Twin sisters Carlee and Jana Nations of Enterprise Attendance Center have signed scholarship offers from Jones and will join the Bobcats softball team in 2018. They expect to bring strong defensive skills and a sure bat, respectively, to a powerful team that went deep into the NCAA Division II finals earlier this year.

“Jones has a winning atmosphere, and we really like the coaching staff and the team’s facilities,” Carlee said.

Carlee is a trained pitcher and all-around defender who likes to play shortstop when she’s not on the mound.

“I like a lot of action. I like to have a view of the whole field and be able to see the ball come off the bat,” she said.

Jana, meanwhile, can also play any position, though she prefers third base. But Jones didn’t sign her to play third base.

“If anything, it’s my hitting,” she said.

Enterprise assistant coach Renee Richardson called Jana a strong hitter, saying she would have an impact in the Bobcats’ hitting lineup. She said both sisters have displayed drive and leadership since she first coached them in T-ball when they were 4 years old.

“Even when they were 3 or 4, Carlee tried to tell everyone what to do and where to go,” she said. “They are both extremely competitive, and I know they’ll be an asset to the program at Jones.”

Of course the Nations twins have their senior season at Enterprise remaining. They represent two of four seniors on a team head coach Tyler King believes is bound for a great season.

“For us, four seniors is a lot, and when you’re a senior-heavy team you get leadership,” he said. “Coaching Carlee and Jana has been a blessing because I’ve learned a lot from them — when you coach players, they also teach you.”

The twins’ mother, Enterprise teacher and former girls basketball coach Jill Nations, said she was proud of her girls’ decision to go to college, softball scholarship or not.

“I’m very proud they chose to go on and continue their education,” she said.

Their father, Boardwalk Pipeline worker Jay Nations, said he’s had the time of his life following his daughters around the softball circuit since they were little girls, playing T-ball, travel ball and high school softball.

But, he’s a little sad in their moment of triumph.

“It’s been a fun ride with my girls. I hate that it’s coming to an end,” he said.

The Enterprise Yellow Jackets rose up late in the game to pull away from visiting Salem, holding the Wildcats scoreless... read more