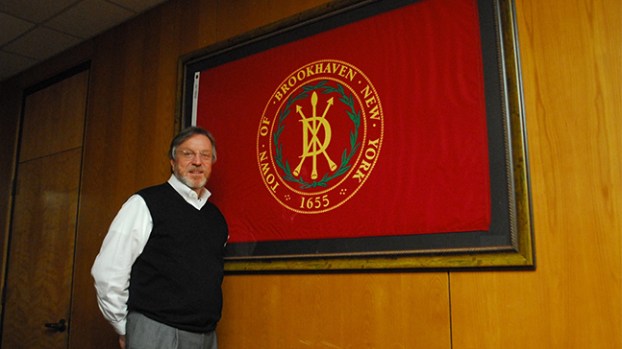 Photo by Trapper Kinchen/Brookhaven Mayor Joe Cox stands next to a flag from Brookhaven, New York, that’s on display in the city’s board room. Lincoln County’s Brookhaven is one of several similarly-named communities throughout North America.

Ole Brook is not the only city with the Brookhaven name

Cities named Brookhaven from across America share their community pride with Mississippi.

As it turns out, Lincoln County’s Brookhaven is actually one of several continent-wide entities that bear the same name.

For example, Dallas is home to Brookhaven College, and one of Toronto, Canada’s most popular neighborhoods is called Brookhaven-Amesbury.

History suggests that each of North America’s current Brookhavens draws its name from a single source, a city in Suffolk County, New York.

Settled in 1655 by English colonists, the original Brookhaven is now home to nearly half a million people.

Jack Kreiger — Brookhaven, New York’s public information officer — said the origin of his city’s name is a mystery. It was christened in 1666 when Long Island was subsumed into the royal Colony of New York, and, from that point onward, it has remained America’s premier Brookhaven.

The first residents of what is now Brookhaven, New York were Algonkian-speaking Native Americans, and the city’s current boundaries actually coincide almost exactly with their original tribal lands.

“Some places in town are very rural, and we have a few business districts, too,” Kreiger said. “We’re very diversified.”

Located in the center of Long Island, New York’s Brookhaven has impressive views of both the Atlantic Ocean and the Long Island Sound.

“We have the most shoreline of any town on Long Island,” Kreiger said.

Another Brookhaven — located in Delaware County, Pennsylvania — is actually landlocked, but draws its name from a series of underground streams. Municipal Clerk Mary McKinney said the hidden waterways occasionally cause problems for local motorists.

“The streams tend to pop up unexpectedly from time to time,” she said.

Pennsylvania’s Brookhaven was originally called “Brook Haven,” and it was incorporated out of a portion of Chester Township in 1945.

McKinney said the people in her town are known for their excessive community spirit.

“We have a lot of great people around here, and our town is really quaint,” she said.

Far from quaint, America’s second largest Brookhaven is a booming suburb of Atlanta — located less than half an hour from the world’s busiest airport.

Burke Brennan, Brookhaven, Georgia’s director of communications, said his city is one of the state’s most unique.

“The remarkable thing is that we are an autonomous city inside the perimeter of Atlanta,” he said.

The area was originally home to Creek Indians, and, prior to the Civil War, John L. Evins owned a cotton plantation on what is now the site of the city’s center.

“These days, we’re largely residential,” Brennan said. “But we do have some industrial corridors.”

The city draws its name from a private subdivision built outside Atlanta in 1910. It was called “Brookhaven Estates.”

According to the Chamber of Commerce’s website, our Brookhaven has bore its name since 1818, and — like every other Brookhaven alive today — it has survived innumerable hardships to become a place people are proud to call home.

“I’m proud to call Brookhaven home, because it is truly my home,” Mayor Joe Cox said. “It’s a great place to live, work, worship and raise a family.”

Drive-through nativities tell story of the life of Christ

Two drive-through displays depicting Jesus’ birth will be up in time for Christmas viewings. Both New Sight Baptist Church in... read more