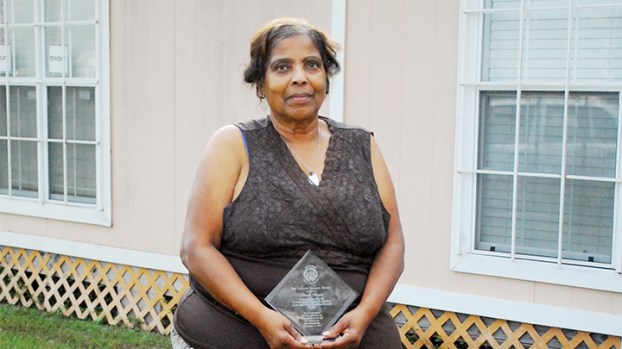 Photo by Trapper Kinchen/Bernetta Character recently received the Vernon Dahmer Award at the Mississippi State Conference of the National Association for the Advancement of Colored People in recognition of her commitment, passion and dedication to the NAACP.

Bernetta Character has been breaking barriers since she was a little girl, and, now, the Mississippi State Conference of the National Association for the Advancement of Colored People has acknowledged a lifetime’s worth of her hard work.

At a luncheon in Jackson Saturday, Character was given the Vernon Dahmer Award in recognition of her commitment, passion and dedication to the NAACP.

Dahmer — for whom the award Character received is named — is a civil rights icon. He is well known for helping people of color register to vote during a time when poll taxes commonly kept them from doing so. He was killed on Jan 10, 1966 in Forrest County.

The award’s inscription reads, “Your inspiration and devotion are an example to us all, and we thank you warmheartedly.”

The NAACP tribute is, at its core, about more than just Character’s dedication to the organization. It honors her long-term, active service to the improvement of American civil rights.

“I work with the community, and I work a lot with the young people,” Character said.

Character has been involved with the Lincoln County NAACP for over 10 years, and she is the chapter’s first female president.

Her devotion to humanitarianism bloomed during her girlhood. Character marched in Chicago’s Westside with Dr. Martin Luther King — once when she was 13, and again when she was 17 — and said he helped inspire her lifelong verve for community service.

“For him to come to the Westside of Chicago, talk with us and stay in a rundown place said a lot about the kind of man he was,” Character said.

She moved from Illinois to Mississippi in 1985 and spent 32 years working for the United States Postal Service. During that time, she became the first black postmistress in Gallman.

Character said the statewide recognition of Lincoln County’s NAACP is a testament to the chapter’s hard work and a reminder of all it has left to accomplish.

The local NAACP’s Youth Council was also honored at Saturday’s luncheon. They were granted the “Units In Compliance Award,” which recognizes their commitment to orderliness, for the third year in a row.

As she reflects upon her life, Character is pleased with what she has achieved and is overwhelmed by the breadth of her recent acknowledgment.

“It’s a great honor for me,” she said. “Especially because it’s the Vernon Dahmer award.”

Ole Brook is not the only city with the Brookhaven name

Cities named Brookhaven from across America share their community pride with Mississippi. As it turns out, Lincoln County’s Brookhaven is... read more