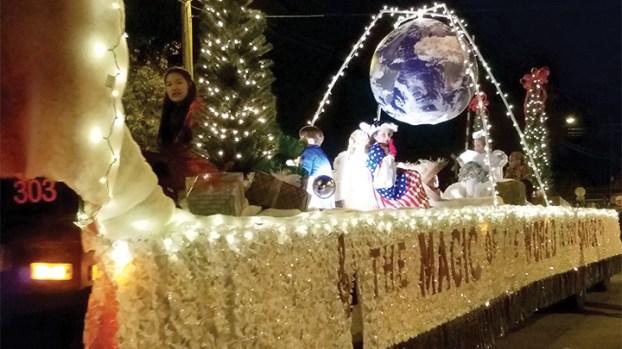 Photo by Donna Campbell/A young rider on a float waves to the crowds at last year’s annual Brookhaven-Lincoln County Christmas parade. This year’s parade will be Nov. 30 beginning at 6:30 p.m.

The Brookhaven-Lincoln County Christmas Parade will start with heroes and end with a saint.

In keeping with the theme of “All-American Christmas,” the grand marshals will be World War II veterans who will ride in a heated van at the front of the parade. Bringing up the rear is Ole St. Nick, the one and only Santa Claus himself.

The parade is traditionally held the Thursday following Thanksgiving, which will be Nov. 30. It begins at 6:30 p.m. on West Cherokee Street.

It will take its usual route, said Katie Nations with the Brookhaven-Lincoln County Chamber of Commerce.

The parade will start with the fire brigade at 6:15 p.m. followed by the grand marshals’ vans at 6:30 p.m. Miss Merry Christmas Allie Claire Townsend will be up next and she’ll be followed by Miss Lincoln County Hospitality Shelby Flumm and the rest of the parade entries and area bands.

Nations is asking all WWII veterans who’d like to be in the parade to call the Chamber at 601-833-1411 today to register. They’re coordinating transportation for the veterans, who will be contacted individually with the information closer to the parade.

Parade forms are also available at the Chamber for any group that wants to participate. Entry fee is $35.

The Chamber will host Santa Claus on a special sleigh at the end of the parade, Nations said. Santa and the Chamber’s Junior Ambassadors will toss candy to the crowds.

Bernetta Character has been breaking barriers since she was a little girl, and, now, the Mississippi State Conference of the... read more